Interview at Stand UP NY with Kerri Louise Stand Up Comedian 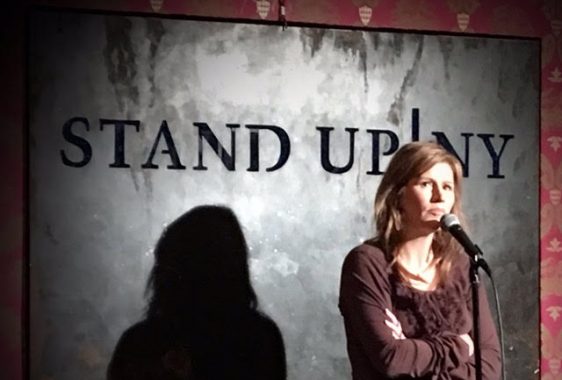 We met up with Kerri Louise Stand Up Comedian after her comedic performance at the Stand UP NY on the Upper West Side. It was a Friday night and this famous Upper West Side Comedy Club. We sat beside the bar and discussed all things comedy. She is a regular at NYC Comedy Clubs and can be seen at Stand UP NY, New York Comedy Club, Comic Strip Live, and Broadway Comedy Club.

1. What other jobs did you do before starting stand up comedy? I was a lifeguard, swim instructor, babysitter, waitress, personal trainer, aerobic instructor, teacher K-8, and a girlfriend.

2. How did you know you wanted to be a comedian? I was the youngest of 4 with two older brothers who would beat me up on a daily basis and an older sister who did not want to have anything to do with me. To get any attention from any of them I had to be funny. I was always funny with my friends on all the sports teams I played I became captain because I always demanded an audience…I was never a class clown because that meant I would have detention and I would not be able to play sports so I was always the good kid in class and saved it to be a goofball on the field, court, or pool…depending on the sport I played at that time.

3. If you weren’t doing comedy, what would you be doing? lifeguard, swim instructor, babysitter, waitress, personal trainer, aerobic instructor, teacher K-8, or a wife and mother!!

4. Where are some of your favorite places to perform? I Love doing festivals Nantucket comedy festival and the lucy fest are two of my most favorite. I loved performing in Vegas, and It was so much fun to perform in Hong Kong as well!! Comedy is new to them, and there are not many clubs out there so it was a treat to have an audience so accepting before you even opened your mouth.

5. Who are some of your favorite up-and-comers in the comedy world? Mark Norman,

6. What’s the best advice you’ve ever gotten? STAGE TIME- It’s never about you-you always need to redefine your passion in this business-

7. When did you feel like you were a pro comedian? I’m still waiting to feel that way…JK..When I got my first invite to the HBO Aspen Comedy Festival

8. How often do you perform comedy per week? BC—meaning before children…. I was up 4 to 5 time a week and AC (after children) a little less than that sometimes not all especially when they were younger and my husband, Tom Cotter (another stand up comic) was on the road!

9. What are your favorite comedy clubs that you perform at? Love the comic strip live in NYC that’s my home club. I lived near there when I first moved to NYC and it’s been my favorite ever since. The club has changed through the years but when I first started out in Boston I loved Nicks Comedy stop!

10. How do you deal with hecklers? Sometimes right away and then if it’s a really bad heckle it becomes a slow, death throughout my act. I know what jokes are coming up so every joke I do that takes about something disgusting ugly, bad, or sick I will compare them to that throughout my act so by the end of my act that person wished he/she never said anything at all!

11. What advice would you give your younger self? Get out of Comedy…Your mother was right it’s like winning the lottery to hit it big

12. How would you describe your brand of comedy? Storytelling comedy with funny characters. I’m like the girl next door, your best friend who will tell you the truth no matter how bad it is, but in a funny, edgy, way that will make you feel like you’re normal!

13. What do you talk about in your act? My life, my husband who is a comic, my kids, my history as a kid with learning disabilities, my parents, my Catholic upbringing, and just about everything in-between

14. How did you develop your style of stand up? Who were your influences growing up; both from the world of comedy and elsewhere? I hate to say it but Bill Cosby and his storytelling styles, Gilda Radner on Saturday Night Live, George Carlin

15. I love to interview comedians, Can I ask what happens when you are in front of a crowd, and no one laughs? I pee my pants….JK I end up telling them to relax, drink, more laugh a little and no one will get hurt! Sometime’s you have to teach an audience how to behave…if that does not work then I pee my pants and cry.

16. What made you decide to be a comedian?no one really decides to become a comedian it just becomes you. Were you born funny? No