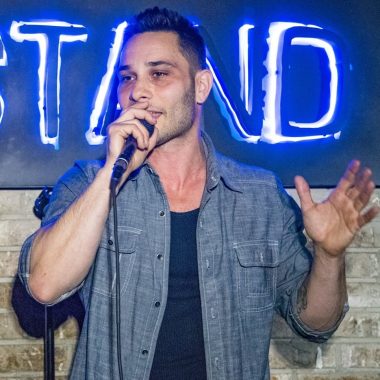 We met up the other night with Stand-Up Comedian Justin Silver right before his comedy show at The Stand NYC: Comedy Club NYC & Restaurants. We discuss some of his odd jobs, comedy influencers, and about some of his favorite comedy clubs in NYC.

Justin Silver at The Stand NYC

How did you know you wanted to be a comedian? I loved comedy when I was little but didn’t start until I was 25, after I had been a juror in a murder trial. I realized that life was precious and I wanted to be a clown.
If you weren’t doing comedy, what would you be doing? If I wasn’t a comedian I think human trafficking is an interesting field.
Where are some of your favorite places to perform? I love The Stand NYC comedy club here in Murray Hill. I spent a long time learning how to do comedy at places like the Creek and the Cave and the Brokerage in Long Island. I love performing in New York. I like going on the road but I think New York is the best town for comedy.
Who are some of your favorite up-and-comers in the comedy world?  I’m a big fan of Paris Sashay who is incredibly funny and Luke Mones who is as well.
What’s the best advice you’ve ever gotten? The best advice I ever got was from my dad “Don’t overestimate your value”
When did you feel like you were a pro comedian? When you stop working a day job, that’s a big thing. I don’t quite know if you feel like a pro but it’s a step in the right direction.
How do you deal with hecklers? I try to address hecklers in a funny way. If you let them derail the set, they’ve won.
What advice would you give your younger self? Advice to my younger self: a snack shouldn’t cost 48 dollars.
How did you develop your style of stand up? My style of stand up I would describe as “intake at a psychiatric institution”
What advice would you give your younger self? I developed my style by doing comedy everywhere I could.
How would you describe your brand of comedy? I’m sort of a loud opinionated obnoxious cretin. So it was a natural process.
Who were your influences growing up; both from the world of comedy and elsewhere? I wouldn’t use the word influence because he’s, in my opinion, one of the greatest of all time but my favorite comic is Patrice O’Neil.

What made you decide to be a comedian? Were you born funny? I don’t know if anyone is born funny. People develop a sense of humor mainly because they’re losers.
Is there anything else that you wish to promote? I have a Netflix special coming out this summer