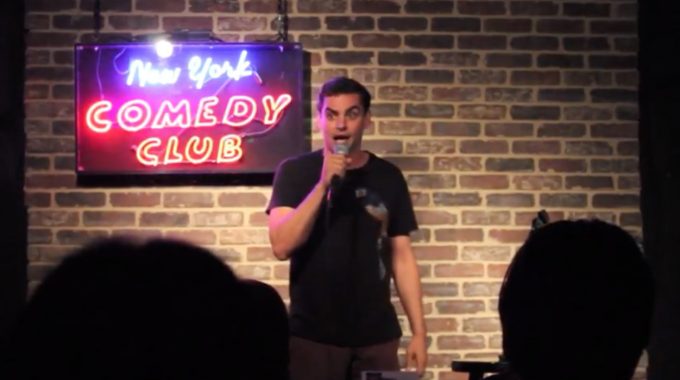 We met up with Michael Verdi at the original spot of the New York Comedy Club in Midtown at one of his shows the lone bird  He is the founder of Lone Bird Comedy and produces a monthly show at New York Comedy Club with his brother and fellow comedian, Paul Verdi. Mike also studies and performs improv comedy with UCB and is a member of the indy improv team, “Baby Haha”. He works by day at a non-profit that was nice enough to continue employing him after he made the choice to shave a mustache. Mike is best known for his intelligent and often dark take on the world as an Italian-American from South Jersey struggling to be the good person his upbringing won’t let him be.

1. What other jobs did you do before starting stand up comedy?
I worked in the drive-through at a bank, was a server at multiple restaurants, and then I got a job at Habitat for Humanity after college. Worked there for 5 years, then I sold out and got a job in finance education, where I help Wall Street analysts pass their licensing exams.

2. How did you know you wanted to be a comedian?
I was a stagehand for an elementary school lip-syncing musical production, and my job was to clear the set in between acts. I played with the props and put on some of the discarded costume parts when I went on stage to move them, and the audience laughed harder each time I did it. Someone’s mom told me I was “comic relief.” I didn’t really know what that meant, but I liked hearing it. I’m still chasing that type of validation from people’s moms.

3. If you weren’t doing comedy, what would you be doing?
When I was a kid I invited all my neighbors over to my parent’s house for a dinner party. I knocked on all their doors and told them to bring something with them. My parents didn’t know I was doing this, and they weren’t preparing for a dinner party. They had to explain to like 12 neighbors, as they came to the door with things they baked or cooked that day, that their son is just a dishonest little shithead. Thankfully, this behavior pattern led me to do comedy, so if I wasn’t doing comedy… maybe prison?

4. Where are some of your favorite places to perform?
Outside of New York City, probably my favorite place I’ve performed in Los Angeles. The comedy scene out there is different, but just as buzzing. Looking forward to getting back out there to perform at The Comedy Store. Philly is always a fun city to perform in and the crowds are down for the dark stuff. Minneapolis has a great room in the Mall of America that I’ve performed at, and there’s a number of good bar shows that were a lot of fun too while I was there. I’ve had a lot of fun going out to Governer’s Comedy Club on Long Island where buddies of mine like Mike Calcagno are regular comics.

5. Who are some of your favorite up-and-comers in the comedy world?
Caitlin Peluffo, Usama Siddequee, and Ian Lara are all people who were on the open mic scene when I started, and they’ve all accomplished a ton of stuff since then. I got to watch Caitlin Peluffo crush on Colbert from my couch. Usama Siddequee was named one of JFL’s New Faces, and he was recently passed at The Comedy Cellar. Ian Lara’s a repped comic who’s appeared on Comedy Central, and I see his name on lineups with some of the biggest and best on the scene.

6. What’s the best advice you’ve ever gotten?
None of it matters, and all of it matters. Don’t overthink comedy, or waste time thinking you’ve got it figured out. Every time I’ve let myself go and just flowed with the audience, I’ve performed well. Then there are those times where I’m in my head and I question everything I’m doing. Those times suck. It’s true that if you don’t let it matter too much, it won’t. Good things seem to happen as long as you keep pushing forward (and you’re funny).

7. When did you feel like you were a pro comedian?
Probably the first time a booker paid for my travel, hotel, meals, drinks and I also got a decent paycheck for the spots I did. Sharing a hotel room with the hilarious Shuli Egar, who I knew from the Howard Stern Show, also made me feel like things were moving in the right direction.

8. How often do you perform comedy per week?
I perform 10-15 times a week on average, sometimes much more. It all depends on where I’m at with my material. If I’ve just written a bunch, it’s a heavy load of mics and shows to work it all out. But when I’m writing heavily, I try to perform less so I can come back to it with a fresh perspective.

9. What are your favorite NYC comedy clubs that you perform?
Without a doubt, New York Comedy Club is my favorite place to perform. I’ve produced a monthly show there for the past 2 and a half years, and somehow it’s gotten better each time we do it. The club is constantly improving and attracting bigger talent, and they recently opened a second location, a 150-seat room in the East Village. Amy Hawthorne and Emilio Savone are pleasures to work with. I also perform often at The Grisly Pear down on MacDougal Street with producers like Kenny Warren and Riley Lassin. And I’ve recently gotten a handful of spots at the new West Side Comedy Club, run by Felicia Madison, which I’ve enjoyed each time I’ve performed there.

10. How do you deal with hecklers?
Usually, I invite them over to my house for backrubs and tea, and if they don’t accept, I weep on stage (or pee, if I have to).

11. What advice would you give your younger self?
Let them eyebrows grow, young bull. Those shaggy caterpillars are your honey pots.

12. How would you describe your brand of comedy?
Dark and smart. I’m looking for people to let loose and think a little bit. I want people to allow themselves to laugh at things that they normally think are fucked up or isn’t their typical flavor of humor.

13. What do you talk about in your act?
My eyebrows, Billy Joel, my family, my dog, New York, Jersey/Philly (where I grew up). Lots of stuff. I try to capture fun scenarios or scenes and frame them into joke format.

14. How did you develop your style of stand up? Who were your influences growing up; both from the world of comedy and elsewhere?
I started out doing standup with my brother, Paul Verdi. He still performs, but he’s based out of Philly now. First time I saw a comic and I felt inspired to do stand up, I was at the village underground watching Sam Morril. His joke writing is clever and tight. It’s difficult not to be impressed. That’s when I started considering it a high-level craft, and I became more and more interested and involved until I decided to give it a shot. I want people to be just as impressed with my joke writing as I was with his.

15. I love to interview comedians, Can I ask what happens when you are in front of a crowd, and no one laughs?
I usually try to pivot to crowd work and make the set more about their experience, less about the jokes I want to tell. If you aren’t gonna laugh, I’m not gonna sweat it. It’s all part of it.

16. What made you decide to be a comedian? Were you born funny?
See Question 3

18. Is there anything else that you wish to promote?
The Lone Bird Comedy show is the second Sunday of every month at New York Comedy Club Gramercy. You can get free admission and ticket discounts at www.lonebirdcomedy.com or following Lone Bird Comedy on Facebook and Instagram.