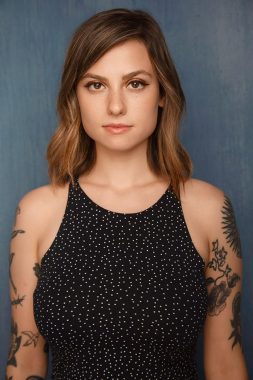 We met up with Natalie Cuomo after her show at the New York Comedy Club in Midtown and asked her some questions about stand up comedy, being a comedian and here are her answers.
What other jobs did you do before starting stand up comedy?
Before doing stand up, I was a classically trained actor. I studied under the great Wynn Handman, and I completed the conservatory program at Stella Adler Studios in NYC. While doing comedy, I managed a coffee shop in Williamsburg called Variety. I would wake up, do my shift from 6:30 am-2:30 pm, take a nap, and go out and do shows around 7 pm. It was quite a time.

I’ve loved performing since I was a little kid. I think the moment that energy funneled into comedy was when I began writing my own jokes while I was in acting conservatory.

If I wasn’t doing comedy, I would live in the middle of nowhere on a mountainside, with sheep and goats, and a vegetable farm.

I love to perform at Greenwich Village Comedy Club and New York Comedy Club. Those stages just feel like home. In Los Angeles, I always have a blast performing at The Hollywood Improv and The Comedy Store.

I have SO MANY favorites. Jay Jurden is amazing, so is Maddy Smith, Yedoye Travis, Isabel Hagen, Hanna Dickinson, and Molly Austin.

Just be yourself. It doesn’t matter what anyone else thinks. Be true to you.

It was definitely an accumulation of moments. When I started performing in Los Angeles at some of the bigger clubs with comedians I’ve looked up to my entire life.

When I got my first paid spot at a club. When I did my first road gig. But ultimately, after time and hard work, there was a shift in my confidence that made me feel like a professional. Comedy became an integral part of my identity.

I perform comedy every night of the week. Sometimes several shows a night.

What are your favorite NYC comedy clubs?

It depends on the circumstance. Hecklers aren’t always rude, sometimes they’re trying to be supportive- but they’re wasted.

Fuck it. Fuck what anyone thinks. You’re awesome.

My life, growing up in NYC, romance, and tattoos.

I developed my style of stand up from just doing it. The more you get on stage, the more your persona evolves into something that is true for you. My influences growing up were definitely musicians. Rock and roll really spoke to me. I was obsessed with bands like Sonic Youth, Nirvana, Nine Inch Nails. They really got me through some hard times. As far as comedy goes, as a teenager, I really looked up to Sarah Silverman, Nikki Glaser, Amy Schumer.

If no one’s laughing, I’ll definitely just go into crowd work. Or I’ll pleasantly make fun of myself.

I love performing. When I was in elementary school, I was terrified of the auditorium at my school, but when I did the school play and was on stage, I felt ALIVE. It’s just in my blood. I like making people laugh. I like being on stage. It’s who I am.

If you could choose 4 comedians to perform with on a show what would your lineup be?

Receive a 25% discount on all NYC Comedy Club Show tickets