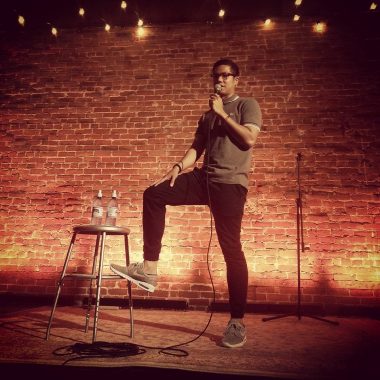 I was kind of just doing it for a while, and then a few comedians that I respected told me I was funny, so I felt like I had to keep it up.

I guess I’d be working in education, working on the down-payment of a house. I’d be in a mediocre relationship with a border collie, driving a used Prius in Seattle. God, that sounds nice.

My favorite cities to perform in are Vancouver, Minneapolis, and New York. Those cities have smart audiences that understand comedy. Also, their audiences aren’t so easily entertained, so when you aren’t funny, they let you know.

Damn, that’s tough. I just did a couple of shows with Kevin Iso, and his comedy really does it for me. I moved to New York like 9 months ago, so I’m constantly discovering new comedians that I’m loving. To be honest, I’m afraid to mention some of my friends and not mention others, so let’s just say Kevin Iso is great and walks away from this.

Sell out as soon as you get the opportunity. Hit me up, Monsanto.

Somewhere around 5-7 times. I’d love to be performing more but I’m still pretty new to the city.

9. What are your favorite comedy clubs that you perform?

I let them get to me and hurt my feelings, and then I talk about it with a therapist for like 6 months.

Get in early on this crypto stuff. And when you’re a senior in college, you’re gonna meet this girl with tattoos from San Fran and you’re gonna regret it if you don’t make a move.

A lot of people know me as the guy that will usually bomb for like the first two minutes, then I get the crowd going, then I bomb some more towards the second half.

My biggest influences were Chappelle, Cosby (unfortunately), and Patrice. And I feel like the thing that helped me develop my style was just getting to know who I am off stage because a good sense of self will help you know who you want to be on stage. And bombing, bombing helped me learn a lot.

If something doesn’t get a laugh, sometimes I address it. Sometimes I power through to the end of the bit because there’s a much better punchline coming up. I just try to be present and not let it shake me.

I don’t think I was funny until much later in my life. But I always wanted to be funny, and there was something about the idea of being a comedian that I always respected and romanticized. It’s a person who is controlling a room with just their words. No instruments or visuals, just words. That’s pretty cool.

Every first and third Thursday of the month, I co-host a show in Brooklyn called Butterscotch at Greene Grape Annex with Maria Heinegg and Courtney Fearrington. I also perform all over the place, so just find me on Instagram at @wilfredpadua for show info.

I have a podcast called Miss Me With That with Andy Haynes. Also, watch Ramy on Hulu. I have nothing to do with that show, it’s just really good.