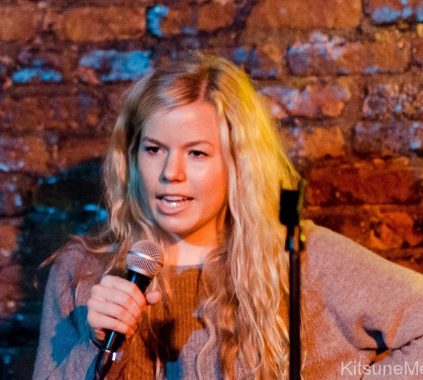 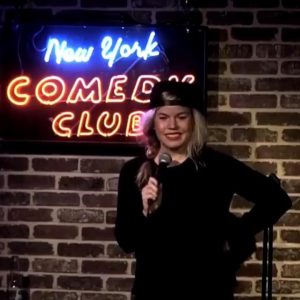 Blair Socci is an LA-based comedian who recently moved to LA after starting her career in New York. You may know her from MTV and Comedy Central and you can catch her opening for Ron Funches on tour this summer.

What other jobs did you do before stand up comedy?
I’ve done every job there is, and so many more since I started comedy. I’ve truly lived 9 lives. Before I started comedy, I was a commercial real estate broker. I was a junior member on a team selling big buildings and I had to get in the office at 6:30 am and do cold calls ALL day. I wore heels! But it taught me about work ethic and life. I feel super lucky now that I get to do something I love because wow that life was not right for me. Before I started comedy, I was very panicked that I was gonna rot under that fluorescent lighting.

How did you know you wanted to be a comedian?
I didn’t. I didn’t see a stand-up show until I was 25. I was a writer and I was dating a dude who just started comedy. I became a fan of comedy and started interviewing comedians. Later on, we broke up, I moved to New York and awhile after, in the shower, the thought came to me “Oh I should try this”. And then I did a few days later. My brain didn’t let me know that I wanted to do it until that moment. I always thought “Wow, I would never get on stage I am way too shy” lol.

If you weren’t doing comedy, what would you be doing?
Pro Surfer. That’s truly the only other thing I can think of that would be as cool. But realistically, I would probably be married with 3 kids and sporadically writing on a sad personal blog in between taking my kids to soccer. My children would, of course, inherit my insane athletic ability and I would teach them to absolutely dance around fools on the field. My husband would grill me lots of steaks.

Favorite places to perform comedy?
I love performing at my weekly show on Tuesdays at Genghis Cohen in Weho, The Blair and Greta Show. We have built something super cool and Greta and I have the best time hosting together. Our audience is mostly women and gay men and it rules. Other spots – In LA, I love the Virgil, the Satellite, Lyric. In New York, I love New York Comedy Club, Union Hall, Littlefield, Knitting Factory.

Who are some of your favorite up and comers?
I recently saw Hannah Einbinder perform. She is so young but already has such a unique style so I am excited to watch her grow. I also love Lex Singer and Corie Johnson.

What’s the best advice you’ve ever gotten?
Work hard, be nice, be patient blah blah. It will happen. But other advice is – don’t take everyone’s advice. There isn’t one way to “do” comedy so you should do what you feel like.

When did you feel like you were a professional comedian?
I mean I am still fairly new to comedy but I guess as soon as I started getting paid to do it.

How often do you perform per week?
Less now that I moved to LA but I feel lucky that I still get to get up a lot. In New York, I got to do all the clubs so it was a lot more spots. In LA, there are only 3 clubs and a lot of movie stars, so there’s less room. But I know it’s in due time.

How do you deal with hecklers?
I make fun of them until they are quiet. I grew up with older brothers, I’ve been heckled my whole life so I am a true professional at dealing with it.

What advice would you give yourself?
Literally, all that matters is how you feel about yourself and if you are enjoying your life. When you take care of those things, everything else falls into place. Always have fun because doing comedy and being alive is a privilege. Also, I would tell my younger self, Hey bitch, you don’t have to wear XXXL flannels in order for people to respect you and not look at your body lol.

How would you describe your brand of comedy?
I would say my comedy most closely resembles Patrice O’Neil. Jk I have no idea how I would describe my comedy. I feel like if you can describe your comedy you are mentally ill.

What do you talk about in your act?
These questions are really stumping me. I talk about my upbringing, beef, god, food, breakups.

How did you develop your act on stage? Who were your influences?
I was a writer before I started doing stand-up so I scrupulously wrote and re-wrote my first five minutes to death. My legs shook every time I got on the stage for the first few months. But the short answer is I did a ton of mics until I was good enough to get booked on shows and now I just try to keep writing a bunch and work super hard.

Thanks for reading this interview with the talented comedian Blair Socci at the New York Comedy Club East Village. If you are looking for some great laughs there is no better place to find tickets.