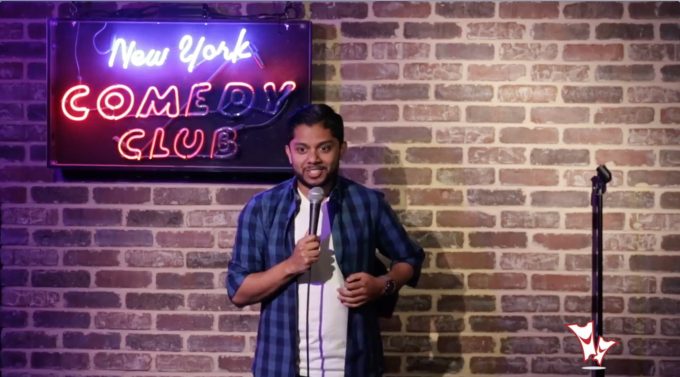 By: Joseph Santiago
We met up with comedian Mahesh Kotagi after his comedy show at the famous New York Comedy Club located at 241 East 24th Street in Kips Bay in Manhattan.
Mahesh was born and raised in Texas. However, he doesn’t have a Texas accent. He is quickly becoming a rising new talent in the New York Comedy Club scene & Los Angeles.
In 2017 voted Best of the Festival for Burbank Comedy Festival. He produces and hosts Inside Jokes and co-produces the All Brown Comedy Throwdown. In addition to comedy he is a writer, producer, and an all around nice guy.
1. What other jobs did you do before starting stand up comedy?
Worked in a pharmacy.
2. How did you know you wanted to be a comedian?
Loved stand up the first time I ever saw it and was obsessed ever since then.
3. If you weren’t doing comedy, what would you be doing?
Maybe just writing for TV/Film full time.
4. Where are some of your favorite places to perform?
Anywhere there is an audience that wants to hear some comedy.  I love the indie bar shows and intimate rooms.   You get to feel like you are right in the audience.
5. Who are some of your favorite up-and-comers in the comedy world?
These guys are more seasoned pros but my favorite right now are Mark Normand and Orlando Leyba.  They just have such amazing jokes/writing/ and stage presence you want to keep hearing more and more.
6. What’s the best advice you’ve ever gotten?
Be true to yourself and try to make as much material about your own life.  I think it helps more people relate to you and creates a nice bond with the audience.
7. When did you feel like you were a pro comedian?
Do you ever feel like this?  Ha – I think maybe after getting paid regularly to do stand up.  It always feels amazing getting paid to do something you did for free/lost money doing for so many years.
8. How often do you perform comedy per week?
A lot less living in LA currently but I like to try to get up at least 5 times a week here.  NYC is just so much easier to get multiple spots in one night.
9. What are your favorite comedy clubs that you perform at?
My fav clubs in NYC are New York Comedy Club, Gotham, The Stand, and Carolines.
10. How do you deal with hecklers?
I try to ignore them unless it gets really bad.  I prefer just not giving them the platform they are looking for.  I also cry offstage.
11. What advice would you give your younger self?
Get into comedy earlier!
12. How would you describe your brand of comedy?
Relatable, every day, life experiences.
13. What do you talk about in your act?
I talk a lot about dating, and marriage stuff right now.  I try to keep it relatable but also still somewhat smart.
14. How did you develop your style of stand up? Who were your influences growing up; both from the world of comedy and elsewhere?
I kind of just plugged away until I started to feel comfortable about what I was saying on stage.  I love Seinfeld, Chris Rock, and Dave Chappell.  They all have different styles but all are masters of their craft.
15. I love to interview comedians, Can I ask what happens when you are in front of a crowd, and no one laughs?
It sucks haha.  I’ve gotten used to it now and have a few save lines that I can throw in and usually win them back.  I think what works for me is I just address that the joke bombed – I think the audience gets to have that sense of relief when you admit it’s not working.
16. What made you decide to be a comedian? Were you born funny?
I don’t think I was born funny but I always loved making people laugh and smile.
17. When can people see it?
I update my site with my dates and my Facebook page.  www.maheshkotagi.com and www.facebook.com/maheshkotagicomedy
18. Is there anything else that you wish to promote?
I created a video of myself trying to do as many sets in LA in one night as possible.  It’s really hard to get 2 in one night here, and so I tried to shoot for 10!  Links are on my website and social media.