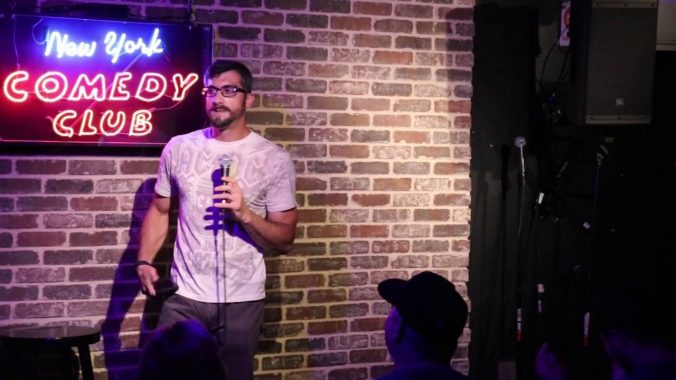 Sal Coladonato is a Stand-Up comedian and podcaster from New York City. He performs at comedy clubs around NYC. He does stand up comedy at New York Comedy Club, Dangerfield’s & Broadway Comedy Club. He also spent time as an Airborne Infantryman in the US Army.

We recently caught up with him right after his comedy show in NYC at the New York Comedy Club. It was a fun packed show with fantastic energy and a great lineup and the show was completely sold out.

If you are interested in seeing Sal Coladonato a comedy show at the New York Comedy Club. Please use the promo code Blog25 for25% off comedy shows in NYC.

1. What other jobs did you do before starting stand up comedy?
US Army Airborne Infantry and NYC Union Carpenter

2. How did you know you wanted to be a comedian?
I always wanted to perform more specifically I always loved making people laugh. I remember being in 7th grade English class and everybody was having a great time watching me imitate the vice principal in a joking way and I had everybody’s attention including the teacher. It was all going really well until I jumped on to another subject to get laughs and they did not follow. I learned an important lesson that day about losing the crowd.

3. If you weren’t doing comedy, what would you be doing?
Continuing to build Bridges and other buildings around New York City and supporting my family

4. Where are some of your favorite places to perform?
Of course, I love to perform at some of the well-known clubs around New York City. Yet I find a lot of my favorite shows happening on the road or locally in Staten Island that my friends and I are starting to produce. So more specifically I love places like New York Comedy Club or the Stand as well as others in the city and one of my favorite places is Sioux Falls South Dakota where I’ve gone to their Comedy Festival 2 years in a row and had an absolutely rejuvenating time for me comedy-wise.

5. Who are some of your favorite up-and-comers in the comedy world?
That would absolutely be the troupe I roll with. Greg and Rob Cardazone and Patrick Haggerty among others here locally. We are the team who hit it hard together every week and on podcasts. We all kind of started around the same time and network together and every time one of us improves or gets something good in this it pushes the rest of us to grow and continue that trend of upward mobility. It’s good to have allies in this.

6. What’s the best advice you’ve ever gotten?
Seeing as nobody could really tell you how to be the comedian that you are I’m going to sound corny and say being told to not give up and just keep pushing on is the best. Also, this advice has not been given to me but I once heard Sarah Silverman say you have to be willing to lose the crowd. Meaning you need to take that chance and not be safe.

7. When did you feel like you were a pro comedian?
When I started getting paid. Also when I started doing shows with or hosting for people like Rich Vos, Jim Florentine, and Jackie The Joke Man Martling.

8. How often do you perform comedy per week?
1-5 times depending on my schedule.

9. What are your favorite comedy clubs that you perform at?
New York Comedy Club, The Stand, Fernson in SD, PepperJacks, & Comic Book Jones

10. How do you deal with hecklers? It depends on situationally. Sometimes I try to position to them where they are starting to annoy the rest of the audience and then hit him with the Jab. Usually something about their appearance or if I’m able to make fun of what they just said. Sometimes I try to level with them and even bring myself down a notch to show I’m not a threat.

11. What advice would you give your younger self?
Start comedy a little earlier. Face your fears a little earlier. But not too much earlier you need to have some real adult experience in life to actually be funny.

12. How would you describe your brand of comedy?
True to life I guess. I try not to be too absurd or obscure or alternative. I take things in my everyday life which is the life of a blue collar working person and I think that relates to a lot of people.

13. What do you talk about in your act?
I talk about work as a carpenter, as an army veteran but most especially being a husband, a soon-to-be father and stuff in the news. I also like to pick stuff out from around the room or in the crowd that happened earlier in the show.

14. How did you develop your style of stand up? Who were your influences growing up; both from the world of comedy and elsewhere? There’s only one way to develop your style of stand up. You just have to get on stage and do it a bunch of times. When you start out you think you have an idea of what you’re supposed to sound like or you should sound like people you have emulated in the comedy world and you begin to realize that you’re none of that and it takes time to find that out. My influences growing up are comic book characters and people from history. In comedy as cliche as it sounds Louis CK, Bill Burr, but mostly Jim Norton on the radio more than on the stage. He’s an absolute artist on the radio and at his funniest. Now my biggest influences are the people and factors in my life and the comedians I work with on a daily basis since we work so closely we are constantly learning from and influencing each other.

15. I love to interview comedians, Can I ask what happens when you are in front of a crowd, and no one laughs?
What do you think happens? I die inside. Even if it’s only momentary. Maybe I get back on the next joke and then you charge on but then if I don’t I die a few more deaths. Then I don’t feel good about myself as a comedian until my next show where I do well. The opposite is also true so if I do really well I feel like it is valid that I do this.

16. What made you decide to be a comedian? Were you born funny?
What made me decide to be a comedian is I had no musical talent and I enjoyed making people laugh most and it came to me more easily than I suppose it does to some people. I was also 28 years old and had just gotten sober for the first time in over a decade and while I was starting my life I thought it was time to finally go for something I always wanted to do before it was too late. It was also probably to fill a huge hole that was my ego and narcissism. It’s literally all we’re doing when we are begging people to laugh at us is filling that hole.

17. When can people see it?
What a strangely worded question. When could people see what? My act? I guess that depends on when you’re reading this. I’ll be in New Hampshire this Sunday and then back in New York during the week and just some sporadic dates like that that you can always watch my stand-up sets on Slant Radio on YouTube. Also, listen to my podcast where we put out dates that are always popping up to see us live.

18. Is there anything else that you wish to promote? My podcast The Slant. It is available on iTunes, Spotify, Google Play Music, Stitcher, TuneIn, SoundCloud, and iHeartRadio. @slantshow on Instagram, Twitter, & Facebook. Also, Patreon.com/TheSlant if you want to support us and check out 5th Borough Comedy Festival a local Comedy Festival that we are launching in September.