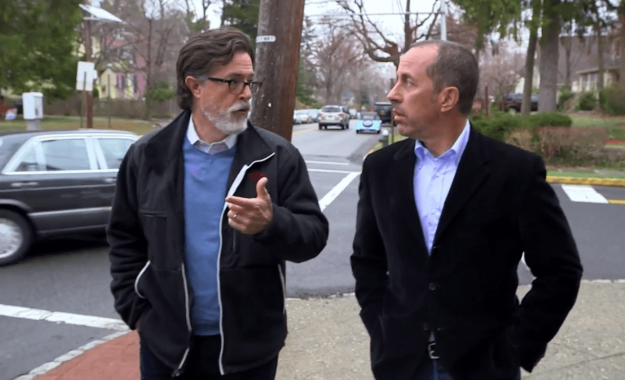 You gotta love Jerry Seinfeld. Not only did he make an incredible, award winning TV sit-com, Seinfeld, but he keeps on chugging in the world of stand-up. Bailing out Stephen Colbert’s dismal ratings on The Late Show with Stephen Colbert, Seinfeld took to the stage to do an epic monologue on virtually anything and everything happening in America today.

He took on the movement to fight for emergency weight-loss measures in the United States by asking “Do we really have an obesity problem in this country?” He posits that until we’re all smooshed together, coast to coast, like a jar of olives screaming for our own space, we really aren’t facing a national emergency.

Seinfeld gave CNN hell for using footage of random people from the US with their heads cropped out of the scene. Random fat-asses walking down Main Street USA, on their way to pick up some donut holes are watching TV and saying: “Hey! That’s my ass!” Jerry pushes the boundaries to ask us if it’s fair to use random people walking down the street as props. Especially on something as personal as weight and obesity in America.

He then continues to attack Swanson and their Hungry Man frozen meals by depicting for the audience a meeting at Swanson’s headquarters where the marketing team sits down and says: “We’re not going to do anything about quality, we’re agreed on that. So, which segment of the market should we target that could choke this pig food down?” Result: Hungry Man.

But the stand-up legend didn’t stop with obesity. He continued into the realm of politics with comments about Rand Paul’s crazy hair, saying: “It’s like a baby with the bassinet hair style…It’s like baby so clean!”

The best part in all of this, aside from the fact that Seinfeld ruled out the International Space Station as a comedy venue, is that Rand Paul was waiting back stage to come out for his sit-down with Stephen Colbert.

You gotta give credit where credit is due. Jerry Seinfeld doesn’t pull punches, even when the subject of his comedy is standing 20 feet away in a green room.