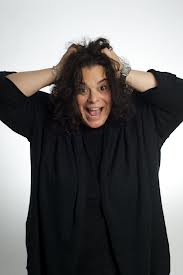 I’ve known Jessica Kirson for  a number of years. I’ve taken her classes and workshops and I’ve always had tremendous respect for her talent and generosity. She is a multifaceted and energetic performer with fantastic “act outs”, voices, characters, and facial expressions.

NS: How long have you been doing stand up?

JK: I’m in my fifteenth year.

JK:  My grandmother told me I should be a comedian. She said every time people were sitting around me they were laughing. I was always the class clown. I took a comedy class and fell in love with it and then I started doing open mics. I never thought I’d be performing for a living. I thought it would be more like a hobby.

NS:  Where did you first start?

JS: I did a graduation “bringer show” at Caroline’s and I did open mics. I  performed regularly  at the old “Gotham Comedy Club” which is now the “Metropolitan Room.”

NS: You talk a lot about your Mom in your act. How influential were your parents in developing your comedy?

JK: Well, I came from a loving family with a lot of pain and drama, but very funny. We always laughed about everything. We all laughed together constantly. My Mom and I went through a process. I was angry at her for a long time and did a lot of work. We are incredibly close now. My family is very supportive. At first they were like, “what are you doing?” They supported it, but they were worried. For a long time I didn’t make money. I was a bartender during the day. I had no money. I had to go in full force.

JS: I was the class clown. I was friends with all different types of people. I partied a lot. I made a joke of a lot of things so I could cope with life. I hated school. I was an ok student, but I never gave it my all. I never could focus. I had a hard time focusing. I still do.

NS: Does that effect your writing process or you doing “the business of comedy”?

JK: It’s very hard and taxing to do the business of comedy. I have a hard time sitting down and writing. I come from a business/sales family. I have business sensibility, but I always feel like I could be doing more and I get down on myself for not doing this or that. I’ve learned over time that I’ve got to really focus. I just really have to focus on a couple of things. If I start thinking about everything I have to do, its overwhelming.

NS: What comics inspired you?

JK: Well my influences were all the comics that were busting their asses making money. I found out right away that you have to get up on stage constantly. I wasn’t like a stand up comedy fan. I was more into Carol Burnett, Lucille Ball, and Saturday Night Live. I would watch sitcoms. I just always wanted to be one of those comics who was making a living and would crush on stage. Those are the people I looked up to.

NS: What would you say about your point of view?

JK: I think you are constantly finding out who you are and your identity. I’m the kind of person who is always working on myself. I’m not the same person I was 5 years ago. I’m always changing.  I’ve always been angry. I don’t understand people a lot. That’s been the thru line. I feel disappointed in people a lot. I don’t understand why people act the way they do sometimes.

NS: Are you conscious of offending people with your comedy?

JK: I never cared about offending people. I care about hurting people. I never want to be mean spirited, but I think every comic if they are good, they are going to offend people. I think if you’re not, there is something to say about that. Its good to get a rise, but there is a difference in being funny and being mean spirited.

NS: Do you look forward to performing every night?

JK: No. I use to look forward to performing every night, but sometimes I don’t.  There have been periods when I literally have to force myself to go on stage and there are times when I can’t wait. I go through different periods. It’s depressing when I’m not into it and not looking forward to it. It’s depressing to me because its something I love so much. When I’m not into it its very upsetting.

NS: Could it be a female moodiness thing?

JK: I don’t think it’s a female thing at all. I know a ton of male comics that deal with horrible depression and anxiety Its very hard for them to get on stage sometimes. The business of comedy can get you down. We get rejected a lot and turned down a lot. As comics we think, “I killed, why did I not get that opportunity?.” The rejection can beat down on you and you think “why am I even doing this? What’s the point?”

NS: Is that one of the biggest challenges? The rejection?

JK: Sure. Yes the rejection is a very big part of it. The frustration. The knowing you have talent and not getting the response you wanted or deserve. I dealt with the rejection tonight. I just walked in and told you that I was heckled horribly.  Comics think that once you get past a certain point in your career you don’t go through things like that, and its not true and its always upsetting. I felt frozen and vulnerable. I felt like I was standing there naked. I also felt like I’ve worked so hard and I’ve had so many achievements and these people are treating me like I just started. They were saying things like, “ You’re not funny. Get off the stage. I haven’t laughed at one think you’ve said.” I felt really angry because I’ve done a lot in my career, and with this job it doesn’t matter. If people don’t get you or don’t like you or if they are going through their own shit or are drunk, things can go wrong on stage. Normally If they tear at me I will tear them down horribly, but tonight I was in a situation where they all knew each other and worked together, and that’s a horrible situation because there is nothing you can do. You can’t tear into them because then more people are going to start screaming out and protecting them. It never changes. Experiences like this happen. They always make you stronger. Every time I go through something like this, something big happens. There’s some kind of opportunity that follows. It’s very much like that in stand up. You go through these bad hard things and its just makes you stronger. Usually there’s something positive that comes out of it. It’s a horrible feeling. I don’t want to be mean and I hate confrontation. And I’m also angry and have rage, and I’m afraid of my own reaction. So I was shaking because I was afraid I might lose my mind.

NS: Do you still get nervous before performances?

JK: Yes, especially If I’m doing a special kind of show. I do a lot of colleges and I get nervous for them because the audiences are younger.  Stuff like tonight, like office situations, Jewish shows, shows where people know each other, and TV shows. I think if you don’t get nervous it’s a bad sign. I think you always need to have some nerves because it fuels you.

NS: What is the primary reward that you get out of this career?

JK: Well, its certainly not leaving a show and feeling like I’m the greatest thing since sliced bread. It’s never a reward for me. The only times I feel a real reward is when people say to me, “ I haven’t laughed this hard in years.”. I remember after 9- 11 someone saw me and said, “My husband died in 9 -11 and I haven’t laughed this hard since he passed away.” Stuff like that makes me know that I’m doing the right thing. I never have an ego about it.

NS: Can you tell me about the “Jessy K” show?

JK: Well I met John  Furshpan. He’s incredible with video stuff. We have a similar sense of humor .He makes these amazing videos. We met through his father, Bernie Furshpan.. We decided to upload the videos to youtube and people love them.

I like to show the behind the scenes of the comedy business. The business is insane. I remember when I told my parents that I got “passed” at the clubs in the city. My Mom and my Dad were like, “Ok great. So now you are making money.” It was $25 a show. And they were like, “Are you fucking kidding me.” They were shocked that that’s how much money it was. So people don’t realize that. People think you go on stage and get paid hundreds of dollars.

NS: What was your first Big Break?

JK: Oh my God. I don’t know. What’s a big break? I’ve done “The Tonight Show” twice. You’re always looking for your next big break and I have to say I’m incredibly grateful for my career. I feel fortunate that I’ve had so many opportunities. I’ve done a lot of things. I think it’s really important to stay grateful, but you are always looking for your next thing. I’m in a movie coming out in January with Nick Cannon, Jim Breuer and George Lopez. I’m hoping that’s my big break.

JK: “Clicks”. I play a cop with Jim Breuer. We’re partners. I wear a blonde mullet. I wear an entire police uniform with a gun. It’s crazy. It was amazing to make a movie.

I’m not optimistic because I’ve done so many things. It’s a credit. Its great, but its panned out to nothing. I’m just realistic. It may happen or it may not. I feel like if I keep having fun and being creative I’ll be ok. Its like I was saying before. If I’m not enjoying it and I feel like I’m not having fun it’s a problem.

NS: How important has management and representation been to your career?

JK: It has not been very important at all. Most of my work has come from other comics.

I’m in Nick Cannon’s movie because he called me. I did some shows with him. He called me up asked me if I wanted to be in his movie. If comedians don’t find you funny it’s a problem. Management does help if you’re trying to get on certain festivals or on TV. It’s more important to get out there and just be funny.