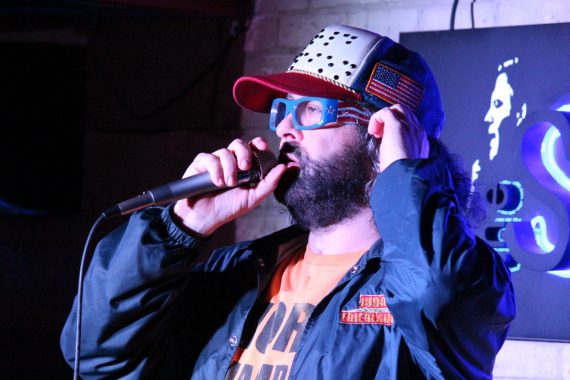 I then went over to stop Judah Friedlander, featured on 30 Rock and other various movies. We sat down after he finished his set and after taking pictures with his fans.

Hannah Chusid: I’m here with the #1 World Champion, Judah Friedlander. How are you doing?

HC: So, how did your set go tonight at The Stand?

HC: Four standing ovations! This is a brand new comedy club, what do you think of it?

JF: I like it a lot. It’s well designed, intimate, good sound system, and good seats.

HC: How was the crowd tonight?

HC: Where was the first club you performed at here in NYC?

HC: It was that long ago?

JF: It might’ve been a place that’s not open anymore called the Eagle Tavern.

HC: Where was that located?

JF: It wasn’t in a good neighborhood back then.

HC: No, it was not. And now it’s really nice over there…Have you ever tried improv or did you start in improv?

HC: Did you ever take acting?

JF: I never studied it.

HC: Where did you go to school?

JF: I quit school after the third grade.

HC: Of course, ‘cause you’re the champion.

HC: How were you dubbed “The Champion”? This is what I’ve always wanted to know. I’ve always thought about this.

JF: You know, they had the world championships, I won it, and there it is.

HC: How many of those hats do you have?

HC: But you’re the champion!–

JF: But not of math or reading.

HC: No math, no reading…Where was your favorite place to perform in NYC?

JF: Well here at The Stand so I don’t want to not say “here”, but there are several clubs I do in the city. I’m probably at the Comedy Cellar the most. I like this club a lot, and I definitely think people should check this club out, because the guys that own it are not just business guys–they live and breathe comedy. They really care about comedy, and it’s a reflection of the room. It’s a well-designed room…but I perform all over the city. The Comedy Cellar the most. I’ve been here just since it opened. I do the Comic Strip–I do all the clubs pretty much. I do Stand Up NY, I do EastVille Comedy Club, I do Caroline’s. I get around to all of them. It depends. I don’t want to say one or the other, but The Cellar i’ve been working at for the longest and the most. If I were to have one home club, it would be that one.

HC: Definitely. Do you find there’s a difference between audiences in NYC vs. audiences outside of NYC?

JF: Not necessarily. There are some things that are different. In general, New York’s audiences are probably the least best-behaved. They’re also good. They’re tougher than other audiences sometimes, which is good.

HC: What was your inspiration for your book “How To Beat Up Anybody”?

JF: That’s a book I made based off of my stand-up, but it’s all new material made just for the book. Stand-up comedy is my main thing #1 for me. It’s based off of my stand-up and being the world champion, but there was new stuff made just for the book, because I like doing comedy in all different mediums. I’ve been wanting to do a book for about 10 years, and i started making that book 10 years ago, and then after working on it on-and-off for 8 years, without trying to get a book deal, people knew my comedy from TV shows–30 Rock–my publicist asked me about doing a book and I told him well I have one I’ve been working on for years. So I made it all myself and it took years to make.

HC: Also, I’m curious about how you got into ping pong/

JF: Oh, yeah I played that as a kid all the time. And then we learned from a neighbor’s friend, Chinese guy, who would go to official tournaments and stuff. So then me and my brother got into some real official ping pong…

HC:…and you’re the #1 Champion of ping pong too, right?

JF: Now if you look up the official ratings, they may not say that, but we knew that they’re corrupt and that I really am [the champion].

HC: And that is our time thank you so much, Judah!

JF: Thank you. And also I’m running for president so vote for me: WorldChamp4Prez.Com.

Make sure you follow the world champion @JudahWorldChamp. You can look him up on Facebook and visit him at JudahFriedlander.com.