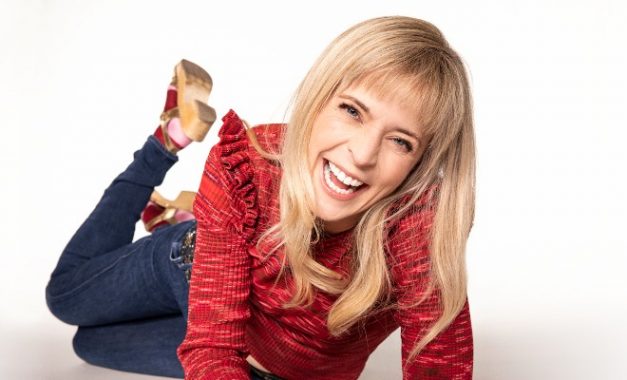 Maria Bamford has been doing stand-up comedy for over 30 years. It is likely that she’s one of your all-time favorites, or you just haven’t heard about her.

This week, Bamford will be releasing another hour-long special, the third of her series. It is titled “Weakness is the Brand,” which is based on how she explains her shakiness in both hands and feet to her audience.

Bamford has a tremor that can be quite distracting, especially in a performer. She imitates a critic who asks why she wouldn’t take medication to offset the hundreds she’s already on so he can feel more comfortable, to which she replies “weakness is the brand.”

But despite all of that, she has somehow managed to make a name for herself as one of the most inventive and funniest comedians of her generation, not only on stage but on her Netflix series Lady Dynamite, which was unfortunately canceled after two seasons.

Bamford thinks she gets anxious about taking space up in the world. She shares her opinions on  The Last Laugh podcast. She says she’s almost 50 years old but is a “very well-off white lady.” She questions her relevance as a performer and talks about the many voices seeking to be heard that are so interesting and believes sometimes she’s not interested in what she has to say but to keep talking.

Bamford loves to listen, and that feeling is what drove her to host a new online talk show called “What’s Your Ailment?” for Topic.com where she interviews other celebrities who have been dealing with mental health issues as well.

Bamford thinks it might be fun talking to other people who would like to share their experiences. For her, joking is the least helpful healthcare anyone can get. “Is it better than the free clinic? I don’t know,” she says.

Here are highlights from the conversation, but the rest can be found on The Last Laugh on Apple Podcasts.

Asked about ‘internet dating’ with fans

Bamford thinks it’s a selfish drive because she finds it difficult to make out time to rehearse her materials alone. Instead, she gets a witness to sit with her and watch her go through everything.

Twitter has been a great source of help with this. From time to time, Bamford asks out followers interested in hanging out for a cup of coffee at a chosen location, and that way gets to meet nice people in the middle of nowhere.

For her, it is a delightful feeling. She says she has done it over 30 times and every time, the people have always been pleasant. She reminisces about the over 75 internet dates she had within 10 years and says: “it doesn’t scare me at all.”

On impersonating her family members onstage

Her mom doesn’t find any problem with it, she says. She just lets things roll off her. Bamford thinks it’s just a trait mothers have in general. She says it’s not strange to hear a kid tell their mom, “That’s stupid,” and she would just go ‘Oh, yeah, that’s great, honey.

I’ve got my own life.’ But things are not that simple with her sister who gets really hurt when impersonated. She says she tries not to, but it’s hard to avoid impersonating her sister who she thinks is very funny.

On why comedy clubs lack inclusivity

Bamford loves clubs very much and wishes they would be more accessible to everyone. In her opinion, they are leaving money on the table and that’s why comedy festivals seem to be doing well because they are inclusive.

She thinks it’s strange how one would go to a comedy club and on the wall is a picture of a famous female comedian that has never been to that club, like Margaret Cho or Lucille Ball, when there are probably two or three female comics headlining.

And that’s considering that women of color are only about 0.5%. It’s confusing to her. There have also been stories of other female comics finding it difficult to get on. To a certain extent, the door is not really open, the statistics show it’s not fair.

Bamford regrets that the show was canceled, and in terms of wanting to be needed, she felt the show had to come back, even if she didn’t want it, although she says she “wanted to be wanted, definitely.

She uses some certain psychiatric medications that got her really tired and was reaching the far edge of her abilities working 12 to 18 hours every day doing the show.

She finds it hilarious that now that her dream had come true, and he suddenly became too tired for it. However, the experience is one she’ll never forget. “An unbelievable dream come true,” she says. In the end, Bamford is happy about everything that has happened.

They’ve been all she had ever wanted and beyond.