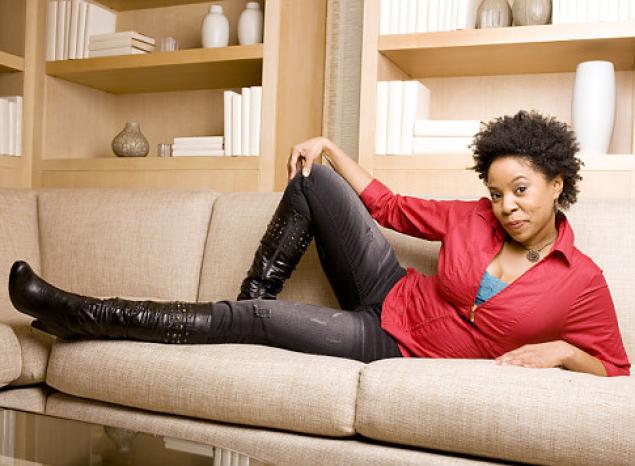 Marina Franklin and I are sitting at the lounge in “The Stand NYC” on a late Friday night after she finished her set downstairs. I’m

chatting with her as she’s sipping her glass of red wine.

Hannah Chusid: Marina Franklin, your set was great. I was able to peak in.

Marina Franklin: It was very laid back tonight.

HC: Laid back? It’s a brand new club that just opened 2 nights ago.

HC: It’s great. It has a really great atmosphere in here. It looks like a really fancy, high-end comedy club.

MF: You know what it is for most comics it’s just you feel great on that stage. It feels right, so most excellent comics are going

to want to work here at this club.

HC: Yeah I got a very great vibe when I went downstairs. I was really happy, it had a nice blue, lighting to it.

MF: It was intimate!

MF: It wasn’t detached. It’s not too crowded. When I was on stage, I can actually focus on what I was doing. I was starting

to open up with a lot of material, and you always find that you look for that club that you could really connect with your

material in. There are some places where a comic will go “Oh, I like that room—I like the forming of that room…” and this is

going to be that one.

HC: It’s all about the atmosphere. It makes a huge difference.

HC: Definitely. So we have some questions here for you.

MF: Well you’re here so that makes a good atmosphere.

MF: It helps because I can act out the bits. I avoided it for a long time to be honest. I used to just do my jokes and focus

on my material but I think that when you can connect to the material—I call it the “act-out” part of my set. There’s a joke,

HC: Where did you study acting?

MF: I went to Syracuse.

HC: So where did you grow up?

MF: I grew up in Chicago, near Highland park, and then I moved to the south suburbs as well, so I grew up all around the

Chicago area. I moved a lot.

HC: So were you exposed to Second City?

MF: No, not at all. I didn’t know improv. That was strictly improvisation, which is so different from stand-up.

HC: Completely different…so what was it like working on The Jay Leno Show?

MF: Oh, on The Jay Leno Show—sadly, it’s over—it was a great experience. I got to work as a correspondent. I got to go to

that hair salon in Harlem which was like the funny sketch that I wrote and created, and it was all about me going into a black

hair salon and asking “Has Harlem changed that much? Can I still get my hair done the way I want? Or do I have to go to a

white hair salon to get my hair done?” So, Jay Leno saw my act, liked it, brought me in, and they liked my ideas. I pitched it

to him, and it was just nice. It’s that final validation with someone like Jay Leno, which is really cool.

HC: Of course. How was working with Jay Leno?

MF: It was great. He would come backstage and come to the green room and ask me how I was doing. He would go “Marina Franklin,

what do you think?”. I’m like “what? You want to know what I think?”, and then I started talking a lot. That’s when I saw his

eyes get sad, ‘cause I can talk a lot (laughs).

HC: So where does your act come from?

MF: It comes from real life stuff. I try to draw from what’s actually going on with me. I want to do more political stuff, but

I’m a little angry about it right now. So I use my own personal life to sort of touch upon the things that people are actually

HC: Of course, because the truth is funny.

HC: How much younger?

HC: 11 years younger—does that consider you a cougar?

HC: Rawr…Well, the truth is always funny and people always get a better response from it.

MF: The truth is funny and you kind of embellish it.

HC: You have to exaggerate a little bit.

HC: So what is next for you? Any upcoming projects?

MF: Right now ? I’m on an hour of new material,

HC: Because I feel like whenever you do stand-up, you just tend to rush through things because you get all excited—the

adrenaline—and then you get up there and you think “Oh, I did that already?”

MF: Yeah, it is hard. It’s not easy—the new stuff is slower. It takes me awhile to get it to work. There’s some stuff that’s just

really obviously funny and there’s some things that you’ll just stick with and try to grind it out.

HC: So do you have any advice for any young, aspiring comics?

MF: You have to love IT. You have to also listen. A lot of young comics come around and the ones that are listening are the

ones that eventually grow and get better. It’s not about being crazy, it’s an art—it’s a craft. Sometimes they’ll come around

and they’ll be all crazy and I’m thinking “you’re going to become that crazy young comic that no one wants to be around.”

stand out?” There’s so many white guys, so many this-guy, so many that-guy, and they want to stand out. Tell your story, and

Marina Franklin: I’m amazed that I said that.

HC: That was the best advice I ever heard. But that’s all the time we have thank you so much!