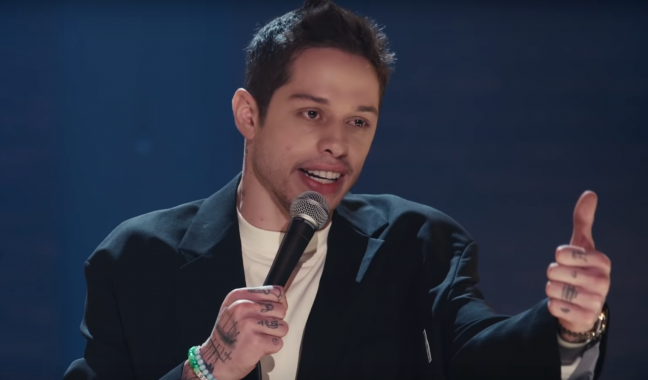 Pete Davidson would like to tell you about his many gay friends. At least, this is how the trailer for his first Netflix comedy special opens.

Although it’s early to tell if the one hour special will be entirely all gay jokes. This positioning seems to be a double down on Davidson’s brand of juvenile jokes. Often, they are about the male sex organ wrapped in a tattooed millennial facade.

Netflix recently released the first official trailer for his special“Pete Davidson: Alive From New York“. The special, an obvious reference to “SNL.” seems titled mainly to remind audiences that Davidson is very much alive.

Netflix claims “Alive From New York,” will be a “candid and intimate comedy special for a comedian known for his raw and straight-to-the-point anecdotes which seek to give the audience more than they asked for. Such vagueness may appeal to the whole endeavor. But was anybody asking for a Pete Davidson comedy special in the first place?

Davidson rose to fame when he featured on “ Saturday Night Live” in 2014. At 20, he joined the NBC sketch show, where he became the youngest cast member ever.

However, high-profile relationships with pop singer Ariana Grande, actress Kate Beckinsale, and Kaya Gerber overshadowed his comedic talents. But all of that contributed to shooting him further into international superstardom.

Davidson hopes with this special, he can capitalize on his newfound name recognition. Repackage himself as a comedian first and foremost.

The special drops at just the right time, as Davidson prepares for the March release of “Big Time Adolescence,” a comedy that premiered at last year’s Sundance Film Festival and received rave reviews.

The comedy is written and directed by Jason Orley in his feature debut. It tells the story of a suburban teenager who becomes influenced by an aimless college dropout, played by Davidson.