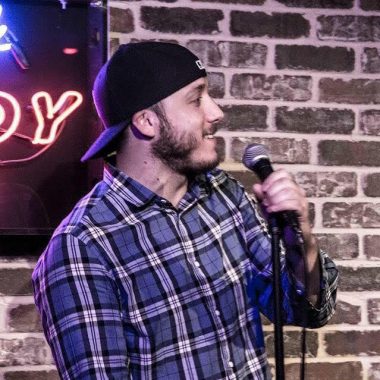 We met up with stand up comedian Kevin Dombrowski after his show at the New York Comedy Club. We discussed all things stand up comedy and his favorite comedy clubs in NYC.

What other jobs did you do before starting stand up comedy? I have literally done everything you can to make money. Except for maybe drugs and prostitution. Mainly bc no one would buy either from me. I think my wife and I counted one day into the 30s, with everything from waiting tables and bartending to installing carpet and delivering tires to lifeguarding and gym associate to landscaping and parking lot maintenance.. you know you’re typical avg white guy living off his parents ; )

How did you know you wanted to be a comedian? I don’t remember, it’s just something I’ve always wanted to try, for some reason I got it and just knew it was for me.

If you weren’t doing comedy, what would you be doing? Probably being a cop. My dad was a cop. I outwardly thought I was going to be a cop my entire life, while inwardly fantasizing about being a comedian. I changed my mind in college when I majored in criminal justice. Just wasn’t the same job I knew growing up with my dad.

Where are some of your favorite places to perform? The road is great man, I love getting to travel and perform in different places and clubs, it keeps me motivated and appreciative. I’ll go anywhere.

Who are some of your favorite up-and-comers in the comedy world? Oh man, there’s too many to list without being yelled at, but my buddy Brett Druck always comes to mind. He’s super talented and funny, him and I pretty much came up together and have always played well off each other. We’re completely opposite and that’s probably why we’ve always gotten along and come close to fighting numerous times. He’s just a great writer, gets the business, and is always there to hear me bitch or bitch in my ear. Good dude.

What’s the best advice you’ve ever gotten? You’re smarter than what you’re writing.

When did you feel like you were a pro comedian?  The first time I got paid for a gig, I was like I’ve made it. Then 8 later… haha I think when you’re a working comic, you’re at a pro level, it’s keeping that workflow and productivity that keeps you there up that allows you to grow and reach new levels.

How often do you perform comedy per week? At least 10 times. That’s the number for keeping my productivity maxed out. It keeps me writing freely, loose and creative on stage, and my mind active.

What are your favorite comedy clubs that you perform at? I really love New York Comedy Club, they do it right over there, definitely consider that my home club. You know it’s a fun hang when my wife wants to actually go there. Carolines and Broadway were among the first clubs to work me, so I always enjoy being there to perform. Where else do I need spots.. the Cellar, I’ve never performed there, but I’m hoping this interview is enough to pass me.

How do you deal with hecklers? Include them in a joke when they heckle, that usually gives them the attention they wanted and will typically go away after. If they’re more persistent I have no problem going after them, that pretty consistently solves it.

What advice would you give your younger self? Stop overthinking and keep moving.

How would you describe your brand of comedy? Personal.

What do you talk about in your act? My life honestly. It’s pretty much a representation of where I’m at in life and what I find humorous and relatable about it.

How did you develop your style of stand up? Who were your influences growing up; both from the world of comedy and elsewhere? I just kept performing and learning. I pretty much had the same influences as every other comic, the difference came in about 4 years ago. I met Carlos Mencia and he’s been an incredible mentor and friend to me since. I’ve traveled the country opening for him and the amount I’ve learned has really made me the comic I am now.

I love to interview comedians, Can I ask what happens when you are in front of a crowd, and no one laughs? Haha, nothing. I don’t panic, something’s off and I just try to figure out what that is and adjust from there.

What made you decide to be a comedian? Were you born funny? After college I fell into the music industry for two years, I interviewed bands and hosted live shows for a website. After I got laid off, I didn’t want to work in music again, I didn’t want to be a cop anymore, so I decided to finally get off my ass and try something I’ve always wanted to. It took me having no direction for the first time in my life to actually find my direction. And yes, I was born hilarious.. haha do people actually answer that?

When can people see you perform? I perform almost every night, so if it’s at night, chances are you can come to see me somewhere.

Is there anything else that you wish to promote? Yes, my brother is trying this pyramid scheme for extra money and is looking for new team members, so if you’re interested in making 100k in two weeks, send me a message.