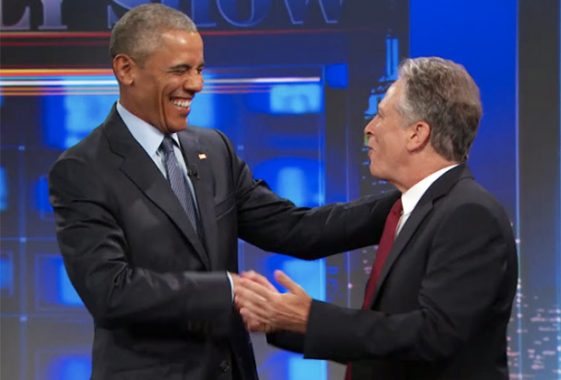 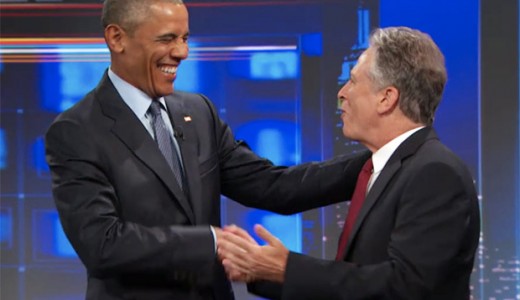 President Obama put his executive powers into use Tuesday — ordering Jon Stewart to continue his hosting duties on The Daily Show. Obama’s late night appearance was his seventh, and final visit to the New York studio.

The President kicked off his usual banter with Stewart saying he couldn’t believe the comedian was leaving before him. Stewart has just two weeks left as host of the satirical news program, Obama’s duties at the White House don’t wrap up for another 18 months.

While the two have formed a friendship over the years — Stewart was quick to jump to the hard hitting questions, picking Obama’s brain on everything from the Iran nuclear deal, to climate change and ISIL.

Stewart is known for being tough with his jokes and interviews, and he holds the President to the same standards as any other guest. Some have gone so far to say Stewart has asked the President some of the most important questions in his career. Looking back at the race to the White House in 2012, former Press Secretary Jay Carney admitted, “probably the toughest interview he had was with Jon Stewart.”

Wrapping up the twenty minute interview, Stewart asked the President about the GOP’s most outspoken presidential contender, Donald Trump. While much of America is deciding whether the nomination is a running joke, a publicity stunt, or indeed reality, the President seemed to agree with the former saying: “I’m sure the Republicans are enjoying Mr. Trump’s dominance oftheir primary.” Stewart adding, “Anything that makes them look less crazy.”

Looking ahead: Trevor Noah has some big shoes to fill, especially after old tweets were scrutinized as rude, anti-semitic, and sexist — leaving many unsure about his takeover of the The Daily Show. Noah recently interviewed with GQ saying: “A guy doesn’t leave and another guy comes in and there’s no backlash. That never, ever happens… when Michael B. Jordan got cast as the new Human Torch in ‘Fantastic Four’, there was backlash, because they were like, ‘How can this fictional character be a black man’”. Noah is slated to take over the show September 28.