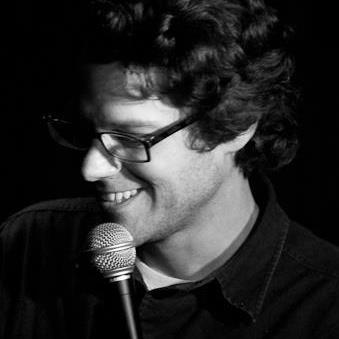 BCT:  So how are you doing?

BCT:  Fantastic, so you were on Last Comic Standing, right?

BCT:  Could you tell us about your experience with that?

RC:      I was on the very first one, so it was kind of bizarre, nobody knew what it was, it kind of came out of nowhere.  I’d been doing comedy in San Fransisco for about three years and it was my first real break.  The audition was weird, we’d been told a little bit about it, didn’t really know much.  I walked in and I got past the first round in San Fransisco and they invited me to LA and I got picked out of that, and there were a lot more comics, then I went to Las Vegas.  That was the year they had us all living together in a mansion in Beverly Hills.  I’d just finished opening for Todd Barry at the Sacramento Punchline, I remember, and then all of a sudden a couple weeks later I’m on national television.  So I went from zero to 2000 really fast.

BCT:  You grew up in San Fransisco, right?

RC:      No, I was born in Washington, DC, and then moved to Virginia.   After college  I was just sick of the east coast, I wanted to let my freak flag fly and get out to San Fransisco, taste the burritos, and dance and do comedy.  Mostly I just launched right into Stand-up as soon as I got there caught I was hella broke.  But yeah, it’s a great scene.  So much of my career is just due to the San Fransisco scene.

BCT:   When did you get into comedy?

RC:      It was after college.  I’d always wanted to do it, I wanted to pursue it but I didn’t know how.  I wasn’t really a theatre guy, I wasn’t a jock, I was just kind of …. I was a comic.  There’s certain comics who are just comics.  I just gravitated toward it, anything that was stand-up I totally would absorb and go through with a fine tooth comb.  I loved it.  I thought the lifestyle was cool as hell, I didn’t want a boss, I wanted to dress the way I wanted to dress and act the way I wanted to act.  And stand-up is completely hard and you gotta sacrifice a lot of your life, but those are some of the perks.

BCT:   Do you remember your first stand-up bits?

RC:  My bits, yeah when I started I didn’t really do that many bits.  It was a full-on monologue where I would go on stage and I would act like a really bad comic.  I would do all these really bad jokes and then I would have a mental breakdown and I would crawl underneath the audience’s table and start singing, it was really out there.  I look back on it now and it was really good, but it scared a lot of people.  But it always killed.  It would go to complete chaos but I would always bring it back and just tie the bow.  So my first stuff, I would sing R. Kelly songs in my mom’s voice, stuff that didn’t really go over in comedy clubs.  I bombed horribly those first few years.  I look back now and some of that stuff the ballsiest I’ve ever done.  Stuff I do now is a lot more honest and fun and cool, but back then I really would freak it out

BCT:   Do you remember where you first performed?

RC:      Yeah, it was called the Luggage Store.  It was an art space on Market Street, and Market Street is notorious as this kinda prostituty place, kinda homeless, druggie place.  It’s like the super downtown, there’s nothing really arty about it, just business men and street people but there was this one art place.  It was all folding chairs, there was no mike, it was hosted by Tony Sparks, like everybody starts there.  It was a terrible terrible open mic, but I did it and there was just this huge elation, like … I don’t know what it’s like coming out as a gay person, but as soon as I did it there just a wash … I remember there were some homeless people in the audience, it was San Fransisco, there were a lot of freaks.  I went up, I didn’t even know I was supposed to sign my name, but I signed my name, I didn’t realize it was to go up I thought it was just to get in.  I thought you just went up, you know?  We’re doing this for free.  But then you realize why it’s for free.

RC:      No, I did write.  I wrote a bunch of stuff down, but the very first time I pretty much just talked about being up there, being in the moment.  It went over pretty well, but it was all very spastic, very high energy, just this release of comedy.

RC:      I started when I was 26, 27.  I remember being at an open mic right when I turned 27.  It was intimidating that I was starting so late, and I really just worked very hard.  Threw all social life away for a good three and a half years, just completely absorbed into doing comedy as much as possible.  That’s what you have to do, you know?  Everybody wants to do it.

BCT:   Who are your comedy idols?

BCT:   Do you do any sketch or improv?

BCT:   Is that off-broadway?

RC:      Yeah, it’s been running for like fifteen years, and I’ve been doing it the past three years.  It’s running at a place in Brooklyn, this venue called Littlefield.  So I do that and that’s a full on play but there’s a lot of jokes and I do this whole monologue in it.  Lately I’ve been doing a lot of rap videos that are all comedy.  And then also I’ve been doing a lot of short films and sketches with friends, you can check them out on FunnyOrDie, I have an account there.  Sketch on stage, in San Fransisco I had this fake jazz band for a while with a few comics, we had all these little sketches.  Right now I love doing film, short films.  With the technology we have it’s so easy to do short films.  But stand-up is the core, and to do that you really have to commit to it.  It sucks being  a mediocre comic, you really have to be good at it to make it fun.

BCT:   Is there any rap artist that you like to make fun of the most?

RC:      No, I don’t make fun of, I respect hip-hop.  I’d rather be the Tenacious D of hip hop, and have respect for it.  In the beginning, before I started rapping I would hate on Eminem or Kid Rock cause I didn’t think they were that good.  But now that I do it, I realize it’s a lot like stand-up, these guys are brilliant and have balls of steel.  So when I do it, I have this song called “Rub My Feet,” and that came from New York, just busting my ass and running around here and banging your feet up.  I have another song called “Coffee and Weed,” it’s all about coffee and weed, and we just did another called “We Nice,” all about how nice we are.  It’s very boisterous and and positive.  You know there’s a ton of negative stand-up, and I always just try to be very positive and happy go lucky.  That’s how I am in real life, and that’s how I approach hip-hop.  I like really vibrant, happy, goofy shit.

BCT:   So do you perform these live?

RC:      I used to.  Now I do it more in the studio, writing and working on lyrics.  I really like rhyming.  I read a study that it’s good for your brain.

BCT:   You know, I have an app on my phone, the rhyming dictionary.  I got it for a poetry class cause I can’t do that, can’t write poetry.

BCT:   So what’s your favorite club in New York City?

RC:      They’re all really good.  I love performing at the Comedy Cellar.  If you just like pure stand-up, its really hard not to enjoy the Comedy Cellar.  But then I love Carolines on a packed night, a Friday or Saturday night.  Carolines is like a Cadillac, it’s old school, cool and smooth.  I like doing UCB (Upright Citizens Brigade).  A lot of the clubs are becoming really touristy, I like UCB cause I like talking to real people in the moment in New York.  I find a lot of the alternative rooms like UCB have more New Yorkers.  But I love the clubs, love the Comic Strip, it’s so cool you feel like Seinfeld up there.  The scene in New York is so great.  All the clubs have their weird tics and tacs.

BCT:   Right, I love UCB it’s so underground and has this really raw vibe to it.  The UCB East, have you been there?

RC:      The Punchline in San Fransisco.  Among comedians that’s just a really great club.  And then I just did Denver Comedyworks in Denver.  That’s a really cool town.  The Punchline in San Fransisco is where I started.  Your best clubs are just bare bones.  And that one it’s really bare bones but it’s run well and the staff is good, they shut down hecklers.  The crowds are smart and attentive and they’re not just papered, meaning free tickets.  It’s a great place to work out.

BCT:   So is there a difference between audiences in New York and other places?

RC:      Audiences are different everywhere.  You never can master stand-up.  Even the best of the best still get nervous and try to figure stuff out.  Each club is a bit different, each scene is a bit different, I did Japan recently at a military base for marines, and that was different.  But once you get New York, it really is the hardest of the hard.  If you can handle this you can handle most anything.  But it can wear on you and make you a negative person.  You gotta watch that, but some people are negative and that’s just their vibe.

BCT:   Do you have any advice for new comics?

RC:      I would say just bust your ass.  It really comes down to focusing, and if you really wanna do it, hard work, and don’t take it that personal.  You’re always going into new situations.  Getting up on stage you need a huge ego, but the other backstory is there’s a lot of funny motherfuckers in the world so you gotta stay humble, stay good, but just be true to yourself and work hard.