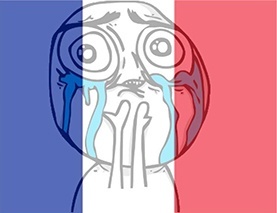 If you’ve been living under a rock the past few days, you probably missed the beginning of World War III or something close to it. On November 14th everything erupted in America, from a simple Facebook filter, where once again America was divided on how we should feel about ISIS’ attack on Paris. You were either a French Flag filterer or an Anti-French Flag filterer: which is completely different than being against France itself.

I’m tired of the slacktivism culture that Americans have adopted lately. This goes as far back as the ‘Wet Bucket Challenge’ where you were challenged to either donate to amyotrophic lateral sclerosis (ALS), also known as Lou Gehrig’s disease, or if you didn’t donate money you would have to dump a bucket of ice water over your head. I’m pretty sure the ALS challenge is the main reason California is in a drought but I digress. Lately Americans have adopted a lot of slacktivist activities where they won’t attempt to contribute towards solving the issue but instead show their ‘support’ by either; putting a filter on their Facebook default or by posting a picture of themselves on Twitter or Instagram “outraged.” All these acts seem to indulge in you feeding your ego and making yourself feel as if you did something right without any actual solution to the serious situation.

We have all these amazing resources to spread awareness and actually help people but instead we, as a generation, decided to use these methods to indulge ourselves with ‘Likes’ from our friends. The reality is that there are so many horrible things going on in the world that it’s hard to decide how to handle each and every tragedy we come across. Although there might not be a clear cut answer to these problems you should realize that the last place the answer will be is behind some keyboards. You can’t google the answer for “world peace.” Well, you can, but NBA superstar formerly known as Ron Artest will pop up, trust me I searched.

There’s nothing wrong with giving the victims of a horrible attack/incident your thoughts and support but if there is no actions taken then how do we prevent the horror from happening again? That’s like a homeless man asking for some change or a sandwich and instead of taking physical action you just say “My thoughts and prayers go out to you.” That man is still going to be homeless and hungry unless someone takes action because that’s how support actually works. Let’s be honest, we all know saying, “My thoughts and prayers go out to you,” can be exchanged with, “I heard what happened to you but I really don’t feel like doing anything at the moment.”

Also, when did everyone become religious all of the sudden? Last I checked most of my friends were atheist, but now they’re all getting into praying and God? Because that’s where all the prayers go to. You know? I’m just saying, if you really support something the proof is in the physical effort, not just what you post on your Facebook or the photos you take. After this write-up I’m going to my local bodega and singing the French National Anthem. Do I know it? No. But at least it’s something. Honestly, if your form of supporting a nation’s tragic moment is to change your filter to a trending default then you really don’t support the well-being of the victims, you’re just finding a way to see how you can make this about yourself. If that’s the case don’t look for what you can physically do to help. Put your default in a French Flag filter that says, “You know there’s a problem and you’re waiting for someone else to solve it.” Let people know it’s about you as well as the victims because, even though there are 120 plus people dead from both the Paris and Beirut attacks, you somehow had to make it about yourself and that’s fine. Just admit it! It makes you feel better about yourself and you want to be an activist but you don’t know what an activist actually does. Side note, if you read this article and are angered by my statements ask yourself, “After changing my filter to the French Flag, what else did I do to prevent terrorism or help the citizens of Paris?” Because if we just changed our profile pictures for breast cancer awareness, instead of actually doing walks and donating, would the breast cancer movement still be a thing?