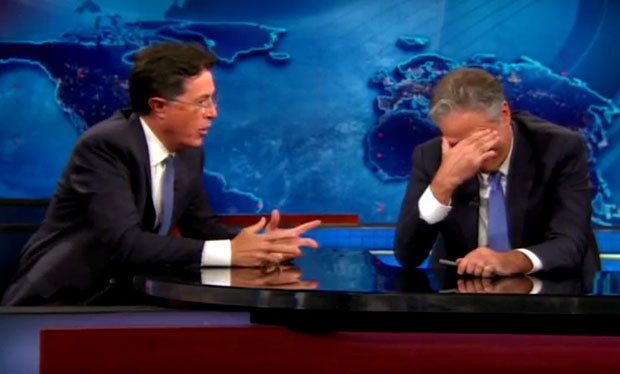 “All of us who were lucky enough to work with you for 16 years are better at our jobs because we got to watch you do yours,” former correspondent tells host 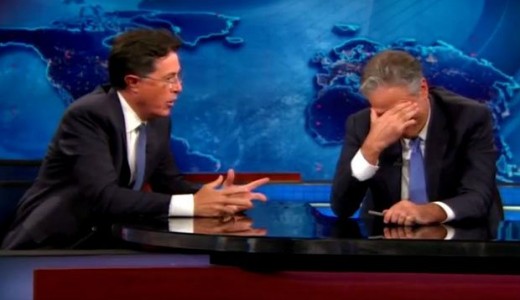 In his surprise appearance on the last episode of The Daily Show, Colbert did manage to make us laugh, kicking off the segment by comparing Stewart’s Daily Show journey to Colbert’s beloved Lord of the Rings: “Like Frodo, you are leaving us on a voyage to the undying lands … For 16 years, you and your basic cable fellowship of funny, clutched that ring of power and trudged up the steep slopes of mt. doom”.

Colbert and Stewart share a close bond — the two aren’t just good friends, Colbert actually got his start in late night on The Daily Show. Colbert started as a correspondent in the early years, and went on to launch his own insanely popular show, The Colbert Report which he retired from back in December.

Colbert continued his Lord of the Rings monologue for nearly an entire segment — weaving in and out of classic Colbert irony, and Lord of the Rings metaphors. But just when Stewart thinks they’re out of time, Colbert stops him from going to a commercial by breaking out of character, to wish his fellow comedian, and longtime friend, goodbye from the late night world:

“Jon, I’ve been asked and have the privilege to say something to you that is not on the prompter right now. Here’s the thing, Jon: You said to me and many other people here years ago to never thank you because we owe you nothing. It is one of the few times I’ve known you to be dead wrong,” Colbert told Stewart, who is seen choking back tears. “We owe you. And not just what you did for our career by employing us to come on this tremendous show that you made. We owe you because we learned from you. We learned from you by example how to do a show with intention, how to work with clarity, how to treat people with respect. You were infuriatingly good at your job.”

Jon Stewart was overcome by emotions, and the two friends hugged as dozens of former correspondents rushed the stage and joined in.

Stewart’s announcement to leave the popular show shocked fans across the country. Stewart admitted the move was to spend more time with his family, but that he would be far from retiring. The comedian recently released the film Rosewater, his debut in directing, and says he plans to take on other projects, as well as dive back into stand up.

Trevor Noah will take over The Daily Show in late September.