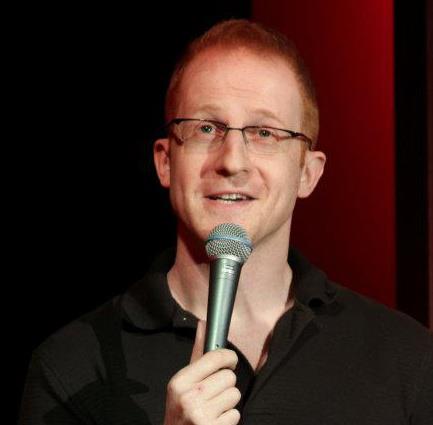 One of the beautiful things about Manhattan, other than the wildlife (pigeons are cute and you know it), is the fact that on any given night you can get a quality live show.  Places like the Comedy Cellar and Caroline’s, to name just a couple, have comics who’ve been on Comedy Central and the late shows trying out the stuff that hasn’t been on TV yet.  Steve Hofstetter’s decided it’s time for these folks to come out to Queens.

Steve Hofstetter performs regularly at clubs across the country, two of them his own.  Along with business partner and fellow comic Marshall Chiles, Steve owns and books Morty’s in Indianapolis and The Laughing Skull in Atlanta.  Figuring he just wasn’t busy enough, his third venture is a nice little place called the Laughing Devil.

Located on Vernon Blvd in Long Island City, just a few blocks from the 7 train and about 10 minutes from Times Square, the Devil is an intimate, 50 seat venue.  Open less than two months, the club has already been attracting top notch talent, who know that when it comes to audiences it’s the feeling and not the size that counts.  As Steve closes out the late show on a Friday night, one audience member shouts out a crack about how small the club is.  Steve replies simply “did you have a good time?  Then quit bitching!” followed by an applause break from everyone, including the man who’d called out.

After the show the veteran comic and multi-club owner took a few minutes to sit down and talk.

BCT:  So what made you decide to start the Devil, New York has a lot of comedy clubs already.

Steve:  Well, I live here, this is my backyard.  And yes, New York has a ton of comedy clubs, but Queens has over 2 million people and didn’t have a comedy club.  Why does Toledo have two, and Queens has none?  I live in this neighborhood, and it’s rapidly …  the growth here is like nothing I’ve ever seen, so we figured let’s get ahead of that and open the club here.

BCT:  So people who are too lazy to go into Manhattan to see headliners have a place –

Steve:  No, tonight we actually had about 15 people in the late show who came out from Manhattan, which is amazing considering the 7 wasn’t even running.

BCT:  I can never get people from Manhattan to come out to Queens for any reason.

Steve:  Well, we’re just over the border.  Plus the buzz of the club has been great, and 14 draft beers is a good reason, high end liquor is a good reason, not to mention top tier talent.  Judah Friedlander’s been here the last three weeks.  Last weekend we had Judah Friedlander and Todd Barry on the same show.  That kind of line-up will rival the Comedy Cellar.  And it’s a very unique experience; it’s a little teeny club.  You heard at the end of the show some guy giving me shit about it  but what they have to realize is that’s part of why it’s such a cool experience.  At the huge clubs it’s like you’re watching tv.  What’s the point of paying so much for a live performance if you’re seated 400 feet away from somebody?  Here the worst seat is 50 feat away from the stage.  So we like it small.

BCT:  You run a comedy festival at Laughing Skull every year, and you’re putting one together here as well.  What can people expect from the Laughing Devil Festival?

Steve:  Well, the Laughing Skull Festival is incredibly fun, it’s great to kind of get away for a week, and everybody can go out to Atlanta.  The difference is a lot of the comics who will be in this festival live here.  Also, the level of industry that can be here is astonishing, because so many people live in this city.  We’re announcing judges one by one; we’ve already announced one of the casting directors from VH1.  We’re also having a party hosted by Faizon Love.   So that will be a lot of fun, when you get a movie star to host your kick-off party it’s a good time.  For headliners we’ve already locked in Dan Naturman, and Godfrey, we’re talking to Todd Barry and Judah.  The opening show will be all headliners.

BCT:  So, can you give me one good heckler story?

Steve:  Here’s the one I wish I’d gotten on tape.  I was in Port Charlotte, Florida, which I will never go back to.  I love traveling and meeting new people but whoa, what a fucking cess-pool that place was.  There was a woman who was drunk the whole show.  The rest of the crowd was great but this woman would not shut up.  And I dealt with her a number of times and it was all right, but then towards the end of the show she said something to the effect that my job was easy, and that really pissed me off.  So I said “I got a bet for you.”  I hadn’t done my closer yet.  I said “I got $100, you do five minutes then I’ll do five minutes, you’ll find out if this is easy or not.  I got $100 says the crowd likes me better,” knowing full well I already had the crowd on my side, there was nothing at risk, here.  And she was like “let’s see the money.”  Now, luckily I’d been paid in hundreds the night before, so I took a hundred dollar bill, which was more than this woman had ever heard of.

I held it up, this one hundred which made me look very baller, much more so than I deserved to look.  I held up this hundred dollar bill, and she starts walking toward the stage and I go “No, you put your money on the table.  I want to see your money.”  So then she stops, cause she realizes it’s gotten real.  She stops and she says well the economy’s down, times are tough, I don’t know if I can afford to risk a hundred dollars, to which I said “so not only are you not good enough at my job to win a hundred dollars, you’re not good enough at your job to win a hundred dollars.”  And that’s when she stepped down.  She never made it to the stage, and I really wish I had that moment on tape because that might have been the most applause I ever got.