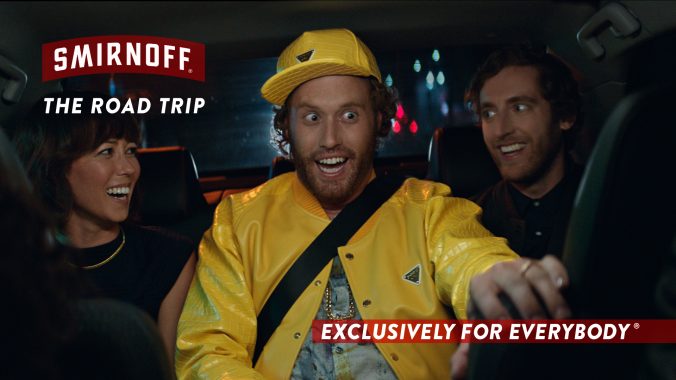 “If you’re going to have to absorb this ad content anyway, then I hope it’s at least really funny.”-T.J. Miller

Comedians T.J. Miller and Thomas Middleditch star in a new campaign for Smirnoff. The advertisements starring the Silicon Valley and Search Party stars are the second reiteration of their “Exclusively for Everybody” Campaign. The pair find themselves on a road trip to the New York Comic Con to pitch a movie about super hero alter egos starring themselves. The comedians play themselves and take the opportunity to have a blast along the way. The pair learn a lot about themselves on the harrowing 3,098 mile journey across the country.

Thomas Middleditch, known for  Wolf of Wall Steet and the upcoming Final Girls, is also reportedly cast in the Captain Underpants movie currently in pre-production. Most of you know T.J. Miller from his turn as the self-appointed world’s greatest talking bear comedian in Yogi Bear 3D, some of you may know him as the boisterous, loud, and fond of marijuana character Erlich Bachman from the Emmy Award winning Silicon Valley.

Perhaps you know him from one of these characters he’s played in these ads.

Back in 2013 T.J. played the part of a smart phone, a dream role for most, T.J.  performed the role like a true maestro, someone who had cultivated what it truly meant to be a smart phone. Words cannot describe the virtuosity of his brave performance.

T.J. has done voice work for multiple shows and movies such as Big Hero 6. In these ads for Mucinex, you can hear T.J’s distinct voice and his love for tacos. He’s gone on record as describing the quality of his voice as, “a drag queen after a night of chain smoking”. In these ads he plays a mucus that doesn’t quite get that he’s not wanted.

Slim Jim must have a prerequisite to have a unique voice for their advertisements. Hearkening back to their Macho Man Randy Savage days, these ads, premiering in September of this year, play on a weird and unique sense of humor. In these advertisements from Slim Jim, T.J. plays a genie that grants wishes, but twists them as a genie is known to do. Unlike a monkey’s Paw, he’s not malevolent but he isn’t quite good either. His heart is in the right place. He’s kind of like everyone’s fun uncle, horrible parent/great babysitter.