The Many Talents of Anthony Kapfer 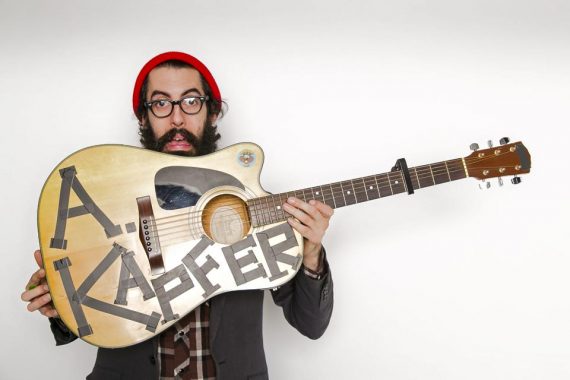 NYC Standup Comedian Anthony Kapfer is a musician, an animator, an editor, a writer, an actor, and an Alternative Comedy trailblazer. And his new special is just the beginning. 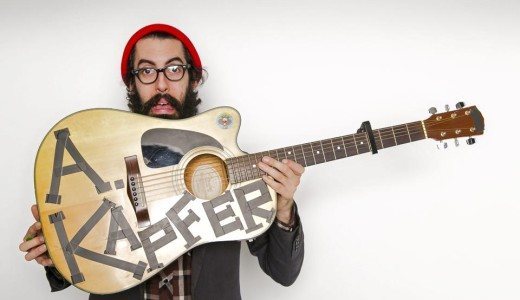 Kapfer was never known for taking projects lightly. When he says he’s spent his whole life in the City, it means he’s lived in every borough. When he says he released an animated standup comedy special, it means it was written, directed, animated, voiced and edited all by Kapfer himself. How does one man learn to master all of these arts while performing in multiple bands throughout his childhood? Essentially, by growing up before the iPhone was invented.

Originally, Kapfer was determined to become a performer. At the age of 15 he was the drummer for different bands in various forms of rock. Though he was a hard-hitter with idols like Nirvana and the Pixies, he was no standard young musician.  “I thought I was gonna be a guy in a band, but I always had an eye for comedy. I was always making these videos and sketches and cartoons with my friends. We weren’t comedians or anything, we were just having fun.” As his bands began creating music videos for their songs, Kapfer was the obvious role of producer. He would shoot videos on VHS while live-editing and building the knack for directing as well as acting. It was reminiscent of the time he and his cousin used to run a fake radio show on a cassette tape, podcast-style, complete with Green Day songs and fake callers. In all aspects, Kapfer was preparing for a career of creation.

Then came the transition. As all of his bands began breaking up he was slowly realizing he needed something more consistent. While recording a sketch with a friend about “The World’s Worst Standup Comedian,” they ventured into a NYC basement to film at an open mic. “We watched about 15 comedians until we realized that these were the world’s worst standup comedians. We had been fooled by watching Carlin and Steven Wright on TV and thought that’s what comedy was, a polished art form, when in reality it can be messy and pretty terrible. We never made the sketch because it was too real, but all of a sudden any fears I had of going up on stage were gone.” His original act was a culmination of tweets over the past few years as well as a song he had written for a concept album while still a full-time musician. The concept? Children’s songs dealing with the horrors of real life. 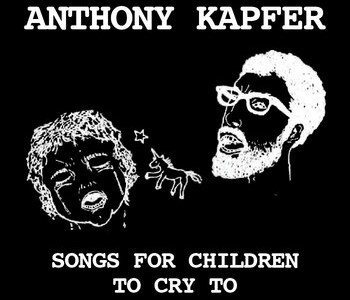 “Kid songs are weird to me, they’re always sorta goofy, the guy is always talking down to the kids. I decided to do one that would be real, nothing vulgar or obscene. I wanted something that you could actually play to a kid, but one you would never want to just because it’s too real.” And too real they are. His most popular track off the album, titled Songs for Kids to Cry To, opens with a sweet tune and simple lyrics about apples and balloons until informing the children that “D is for Divorce which your parents filed for, they don’t love each other anymore.” Between the album and his burgeoning standup career, Kapfer was on his way to developing his unique style.

The fate of musical comedians is often predictable. People are quick to call their instruments crutches and their acts hacky; luckily, Kapfer was able to avoid this resignation. Instead of a musical comedian, he could be considered a comedic musician. His origins aren’t in standup and he didn’t resort to using his guitar, he was a musician who saw he could do comedy. “When I saw Carlin on TV I thought, I like this, but I’m not that guy. At the same time I would see a band like Nirvana performing, smashing their instruments and stuff and I though, oh I could do that. It wasn’t until I saw Zach Galifinakis on Letterman with his piano and one-liners that made me realize this was possible for me.” 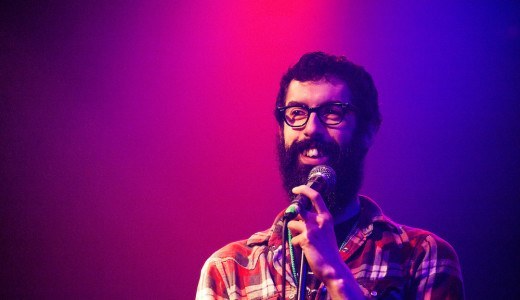 “When you’re a comedian first and you start using an instrument, that’s when it could come off goofy. I don’t bring the guitar up and say ‘hey, look at this!’ I hardly acknowledge it and I’m comfortable playing it. You could tell just by the way somebody holds the guitar when they’re a comedian first. They even do a different voice sometimes, it just all feels very fake.”

What Kapfer is doing on stage isn’t using the guitar to deliver jokes, he’s simply setting a tone for the crowd to settle in to. “It’s easy for people to make associations. When a band performs they like to point out that it sounds like the Foo Fighters or the Pixies, and when a comedian performs they do the same thing. In a way we’re all trying to emulate whoever is the best at what we do. Steve Martin and Steven Wright used instruments back 30 years ago, its been done before but that doesn’t mean its over. When I first started doing open mics I could still do the band thing, but now I don’t have the time to be full time at both. The music helped my transition, but it was also just something I liked. I want my act to be a part of who I am, and I’m a musician”

His latest project, The Animated Stand-Up Comedy Special, was the culmination of all the trades he has trained in. With a run-time of 30 minutes, it includes 20 minutes of his headiest stand-up material surrounded by backstory and skits in which he was able to deliver comedy through other mediums. The catch is that its all animated, by Kapfer. 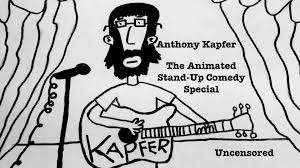 “I’ve been making cartoon for 8 years, I was ready for this. I thought it would be funny how the credits keep saying my name while a song is playing talking about how I did everything, a song which I was singing. It was a nice way to incorporate what I’ve been working on since I was a kid.” This sentimentality is palpable in the special. The title hints at what is obvious when viewing this: nothing like it has ever been done before. It truly is the animated stand-up comedy special. Up-and-comers aren’t doing animation; no one is doing animation and because of this Kapfer is immediately singled out as an innovator. His legacy is slowly being built with the cartoon because as this form begins to develop and others pick it up, it will be his that broke the ice. This is a special you can show your friends- not some clip of a guy on stage but visual satisfaction to the jokes he’s presenting. Perhaps its greatest strength is leaving you wanting more. It would be easy to imagine a full length movie of these animations and skits which are brought to life by Kapfer’s jokes. It’s exciting to think of what he’ll come up with next.

Kapfer is a performer at heart. For his entire life his creativity has been his character, and putting on a show for people that will be respected is crucial to him. He is filled with ideas for screenplays, books and specials which would continue to push the boundaries of entertainment just as he has done throughout his career. 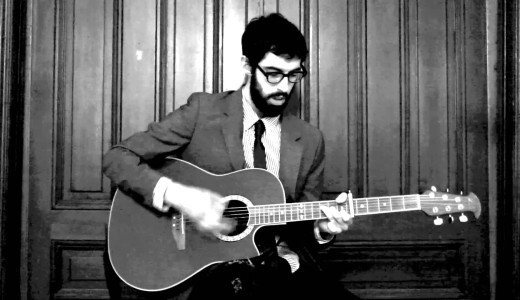