Trevor Noah: A Wildcard Host for The Daily Show on Comedy Central 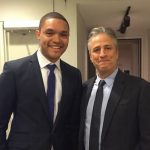 Following Jon Stewart’s departure announcement on  February 10, 2015,  Comedy Central gave the official  word  on Monday (March 30, 2015) that  Trevor Noah  would be  taking over as host for The Daily Show. Jon  Stewart has  been credited with not only developing a  top-rated show  in a tough times a lot,  but creating the  category itself.  Sure, Saturday Night Live has done their  “Weekend  Update” for a number of years, but there hadn’t been a dedicated  satirical news show prior to Jon Stewart’s The Daily Show along with its sister program The Colbert Report. So, to say that Trevor Noah has some big shoes to fill would be an absolute understatement.

Little is known about the South African comedian here in the States, but that didn’t stop Twitter and other social media sites from blowing up with speculation and wild judgements about the comedian’s character, qualifications and comedic style. A number of his twitter comments actually got him in a bit of hot water, but let’s be honest, causing Twitter controversy is almost a prerequisite for any mainstream comedian.

With the limelight’s beam set to full intensity while it shines down and attempts to uncover more about Trevor Noah, let’s look at a few quick facts and insights we’ve learned so far:

2. He’s contributed at least three times as an on-screen member of the cast of The Daily Show with Jon Stewart.

4. At the 2012 Edinburgh Fringe, he hosted a sold out show called “The Racist” (TrevorNoah.com)

5. He performed for the U.K.’s royal family in a specially requested rendition at the Royal Variety Performance. (TrevorNoah.com)

With such a heavy presence in Europe and Africa, can his comedy translate to a U.S. audience? Will it survive the scrutiny and discipline required in a nightly cable show like The Daily Show? Sure, he had a great performance on The Tonight Show, but that was a onetime affair with an American audience. It’s pretty clear that Comedy Central is betting this choice will not only revitalize The Daily Show (as if it needed revitalization), but cause enough of an upset to the status-quo that they’ll be able to reach beyond their usual demographics. Will Comedy Central’s gamble pay off? Only the future will tell.