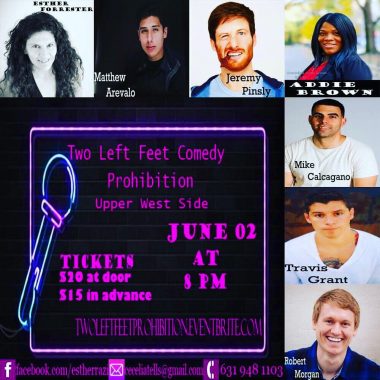 What is prohibited at Prohibition? Absolutely nothing! Anything is fair game for this comedy show which is at a historic space on the Upper West Side on Sunday, June 2nd at Prohibition. It’s Sunday night and what could be a better way to wrap up the weekend than a comedy show on the upper west side? These specially selected comics are guaranteed to knock your socks off and help you forget about the dreaded work week coming. Robert Morgan is as clean cut looking as they come but his jokes aren’t at all vanilla. Robert is quite unique as he recounts his experiences as a demi-sexual. What is demi-sexual? Come and find out!

What is the more, reason to attend? Robert’s acerbic wit will get you moving. Addie Brown was actually Oprah Winfrey’s security guard. She’s an incredibly charismatic person who captures the crazy mistakes and awkward situations we as humans are often put into. Travis Grant really is America’s sweetheart and he’s incredibly funny. His lively stories of road-trips, his girlfriend, and his first experience voting may cause you to wet your pants. Travis has performed all over the country.

Mike Calcagano is the master of bringing family dynamics to life. Mike’s stories about nuisances, his fiancés family holding food hostage from him and his struggles with his nephews and the ability to outsmart his fiancé, Mike’s observations are spot on. Mike has performed at Governors Comedy Club and throughout the country. Matt Arevalo is the winner of the 2018 Long Island Laugh Off.

Get this- he won the laugh off when he was only 18. Most people don’t accomplish such incredible feats before they have even entered college. Matt definitely earned the title. He has solid bits on the awkward aspects of having a young mother and being a stay at home brother that will crack you up. Jeremy Pinsly is a former top-flight marketer who decided that asking people laugh was the ultimate form of success. He’s highly skilled at capturing the awkwardness of dating and relationships as well as the perils of marriage.

He’s performed all over the country. The producer, Esther Forrester, knew that she was destined for the stage when her subway rant about delays and crappy presidential candidates received a standing ovation. Her quirky aura is hysterical as well as her bits about clothing, relationships, dieting, and society’s obsession with social media.

She came up with the name Two Left Feet Comedy because every day she feels like she has two left feet when she tries to haul all of her tennis equipment through the subway turnstiles and can never manage to swipe her metro card successfully on the first try.

At the end of this show, it will be up to you to to decide which comic would most likely be prohibited at a lady’s afternoon tea. Come see this fabulous show on Sunday, June 2nd at Prohibition, 503 Columbus Ave, New York, New York,

Buy tickets at the link here.