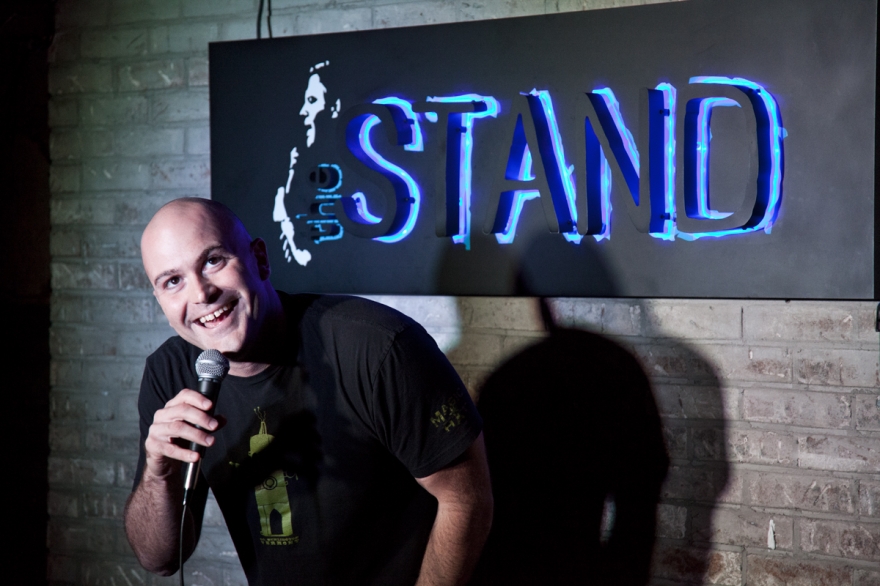 Mike Finoia of Milford never feels more alive, he says, than when he’s standing on a stage, exposing his deepest secrets to complete strangers, and they’re laughing. “Nothing can compare to it,” he says. “Nothing. And when it happened for the very first time, at Caroline’s in New York, well, it was an out-of-body experience.” Since that magic moment at Caroline’s, which came at the conclusion of a stand-up comedy class he completed in December of 2010, Finoia has performed in lots of places and made lots of people laugh at him and his secrets. According to his website, www.mikefinoia.com, he’s joked about everything from his “chicken-stealing great-grandfather to his ex-fiancee and his own father’s epic laziness.” He’s told his stories to everyone from the Gotham Comedy Club, the Cabaret at Mohegan Sun Casino, Comix at Foxwoods, to Joker’s Wild in New Haven. And plenty of other places besides. His goal, he says, is to sign every green room wall from Maine to San Diego. Now New Haveners who might have missed him at Joker’s Wild have a chance not only to see him perform this Saturday at Cafe Nine, but they can also have their own CD/DVD to enjoy the show again and again. He’s doing the DVDs to help take his career to the next level, hoping that people attending will pass it along to friends who will also like it. “I’m proud of this material,” he says, “and I want to record it. It’s a good snapshot of what I do. It may not ever end up on Comedy Central, but it’s capturing this moment.” Finoia, like a lot of comedians working today, started studying comedy from a very young age, long before he ever considered it a profession. He realized early on that making people laugh was a wonderful goal. He loves his grandfather, whom he describes as a “big, tough ironworker who could make any story into a funny one,” and his father, who has a dry wit that capitalizes on pop culture references. Finoia, 32, who was raised in North Haven in a big Italian family, says he watched “Saturday Night Live” and “Night at the Improv” with his parents from the time he was really very little. “I didn’t get all the jokes,” he says, “but I got the rhythm of comedy. I could feel the math of comedy, the set-up, set-up, punchline that meant it was time to laugh. Jerry Seinfeld could be telling a joke in Chinese, and yet we would know when to laugh.” Stand-up comedy was just an extension of what he said he’d really been doing all his life. “It feels a bit like being a little kid in the deep end of the pool,” he says. “You’re holding on, scared of drowning, and then you just let go — and you go under, but you bob back up to the top and you’re swimming. You’re OK. It’s a liberating moment.” The best moments are connecting the audience to those moments that everyone experiences, he says. “Everybody thinks about the quirky things in their lives, and to have someone onstage talk about those things — well, it sparks something in them. I want to have those connections.” His own favorite contemporary comedians are Louis C.K., Bill Burr, Patton Oswalt, and Paul F. Tompkins, yet he was influenced by Bill Cosby, George Carlin, Jerry Seinfeld and Steve Martin. “I can still remember laughing with my father, watching Steve Martin’s ‘Wild and Crazy Guy’ routine,” he says. In his own routines, he talks about the 17 years he spent following the band Phish, for instance, or the time he spent living in Oregon with Ken Kesey, the author of “One Flew over the Cuckoo’s Nest,” or how it was growing up in the 1980s before the Internet was fully operational. “When I went to college, they told me they were giving me an email address,” he says, “and I asked them where I should go to pick it up. My sisters and brothers, who are lots younger than I am, always had the Internet. They’re wired differently. In some ways, I have more in common with the cavemen than I have with them.” Finoia says preparing for an hour-long stand-up show is a lot like preparing a buffet meal. “I take a few of my experiences from all different parts of my life, a pinch of this, a little of this, and I prepare a plate for the audience. It’s a lot of fun.”