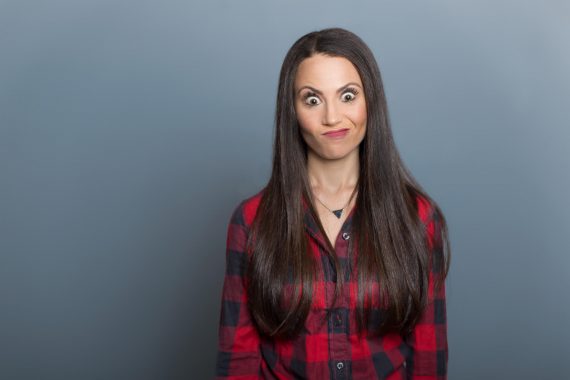 We met up with Katie Haller at New York Comedy Club East Village. She was one of the crowd favorites and we got to sit down with her and talk to her about stand up comedy and the NYC Comedy Clubs scene.

1. What other jobs did you do before starting stand up comedy?
I have had some ridiculous jobs. The weirdest-being a bar/bat mitzvah dancer. That was only for a short time right after graduation. The funniest was being a stand-in for child actors. I’m 4’11 and started doing background work as a side job and then started getting booked as a stand-in. Basically, I would show up to movie/tv sets, go through the scene for lighting and blocking purposes while a 10-year-old drinks Yoohoo in their trailer.

After that, a friend of mine recommended me for a freelance job writing content for celebrity social media accounts, which led to working at The People’s Improv Theater as their social media manager, which led to BarkBox, which was my first job where I felt like I was writing comedy for a living.

I’m now a copywriter at VaynerMedia which I love and feel very lucky to have.

2. How did you know you wanted to be a comedian?
I knew I wanted to be a performer before I knew I wanted to be a comedian. I was very shy in high school and in college was part of a sketch comedy group which I was cast in as an actor. Once I got comfortable I realized “hey, I can do this”. It was sort of like each year in college I got more and more confident in my abilities. So when there was a standup competition no girls were signed up I dared my friend to do it with me. I knew I wouldn’t be happy if I stayed behind the scenes.

3. If you weren’t doing comedy, what would you be doing?
I would be a therapist. I genuinely love helping people and sharing things I’ve learned from my own therapy with them. I am a huge psychology nerd and basically only read books about psychology. What I’m saying is I read a lot of self-help books.

4. Where are some of your favorite places to perform?
–New York Comedy Club is where I feel I’ve developed the most as a comic. Emilio and Amy are an incredible team and have turned that whole staff into a family and it definitely shows when you’re there.

5. Who are some of your favorite up-and-comers in the comedy world?
Alyssa Limperis astounds me. If she isn’t on SNL in the next year or two I will be truly surprised. Aprarna Nacherla Reformed Whores and Awkwafina were a huge musical comedy. inspirations for me. Emma Willman is brilliant. Mark Normand and Ronny Chiang. Nate Macintosh. Molly Austin. Catherine Cohen. Mat Rogers and Bowen Yang.

6. What’s the best advice you’ve ever gotten?
This advice was from Sean Donnelly who is also one o my favorite comics and I swear this advice changed my whole approach to stand up and I tell is to everyone I know who is starting out and asks me for advice. I used to go to his mic and he noticed I stopped showing up and he reached out and was like what happened? You’re funny! And I was like are you serious??? Bc, I specifically remember eating shit at that mic several times and never wanting to do it again. And when I told him that I bombed he was just very bluntly said “if you’re going to mics to get validation from other comics you’re doing it wrong. You go because you know there’s something funny and you’re working it out for yourself. You are not asking if it’s funny.” I can’t stress enough how this game be piece of advice helped my confidence in every way from on stage to writing to just giving me the reassurance that my creative gut is usually right. Doesn’t mean everything I write is gold. But it means I need to keep going and trust the process.

7. When did you feel like you were a pro comedian?
The first time I got paid in actual currency and not drink tickets ?.

8. How often do you perform comedy per week? It depends on the week and this question always gives me anxiety bc I compare myself to people who do it 4x a night. But with my day job or other projects, I end up averaging 3-4 on a good week.

9. What are your favorite NYC comedy clubs that you perform at?
I used to host a monthly show at BarkBox where the audience brought their dogs. I no longer host it there but I still get asked to host or perform at dog-themed events/fundraisers. So yea any time I get to perform and creep on dogs is a plus

10. How do you deal with hecklers?
I think bc I’m small and generally non-threatening I’ve never really had an aggressive heckler in the sense of like “boo get off the stage”. It’s more the unintentional heckling where someone is participating a little too much which is flatting but also like to calm down mam this is not the time nor place. I try to shut it down in a nice way because I hate conflict ?.

11. What advice would you give your younger self?
To take creative feedback with a grain of salt. Not to say be averse to it. It’s important to not have an ego about useful tips that can make you better. I just fell into the trap of assuming all feedback was valid when I was starting out and it definitely led me astray and made me question my gut when I should have listened to it.

12. How would you describe your brand of comedy? Because I both rap and do standup, a lot of times in the same set, I’ve had to figure out how to weave those together. I sort of look at T-Spoon as my more confident self. My standup is a heightened anxious version of myself. So you get to see topics explored from both sides.

My dad is British and has a very sophisticated sense of humor and my mom is a life coach from Buffalo who thinks farts are the funniest thing to ever exist. (She’s not wrong). So to answer your question I describe my brand of comedy as “high brow poop humor”.

13. What do you talk about in your act?
Social anxiety, dating and relationships, my family, weird jobs, dogs, and obviously some classy dick jokes. I try to keep things as personal as possible. I also try to play with pacing and facial expressions and use emotional reactions to heighten jokes. The words are important but a great tip I got once was “Katie, it’s not necessarily the fart joke that’s funny. It’s your fascination with farts that is what makes the joke work.” Despite that being about farts it was actually one of the wisest pieces of joke writing advice I’ve ever gotten and I’ve been able to apply it to non-fart material as well.

14. How did you develop your style of stand up? Who were your influences growing up; both from the world of comedy and elsewhere?
When I was in middle school I used to memorize bits from Ellen Degeneres HBO special and Chris Rocks. I used to do this with movie quotes too.

I didn’t actually start writing comedy until college though where I worked on a student-run tv station show at Ithaca College called “This Week Tonight”. Kind of like The Office meets The Daily Show. I’ve always loved satire which is why The Onion, Clickhole, and Reductress to me are the epitome of great comedy writing. A funny joke is good. But a smart joke is the kind of joke that stays in your mind. That’s always what I’m aspiring towards. That being said I will never stop telling Dick jokes. In The Hall, Chapelle’s Show & Key & Peele have been inspirations for me to channel ideas into sketches.

15. I love to interview comedians, Can I ask what happens when you are in front of a crowd, and no one laughs?
This is probably the simplest yet important shift I made in my mind. There is a very powerful difference between saying to yourself “You’re not funny” and “That joke needs work” or even “that joke isn’t funny”. That shift in dialogue is what keeps a joke that doesn’t land from derailing your entire set. Now, I acknowledge it, shake it off, and move on to something that I know works.

16. What made you decide to be a comedian? Were you born funny?
I was born creative, introverted, empathetic and extremely sensitive. I was too shy for most of my adolescence for this to develop into a sense of humor, but when I got to college things just clicked. I realized I’ve been funny all along, and it was knowing that and acknowledging it that allowed me to continue to develop that muscle. Short answer: Be super shy and awkward in high school and stop growing early so you can then overcompensate with your personality later in life. ?‍♀️

17. When can people see it?
My show dates are always on my website but someones coming up are Women In Comedy Festival On May 3rd in Boston, Carolines On Broadway May 9th, and a new show I’m producing at Stand-Up NY on May 22 called Live Memes!

18. Is there anything else that you wish to promote?
I would also love it if people followed me on Instagram and twitter @halleraryou and watched my music video Bros Holding Fish.

Thanks for reading this interview with the talented comedian Katie Haller at the New York Comedy Club – East Village. If you are looking for some great laughs there is no better place to find tickets.