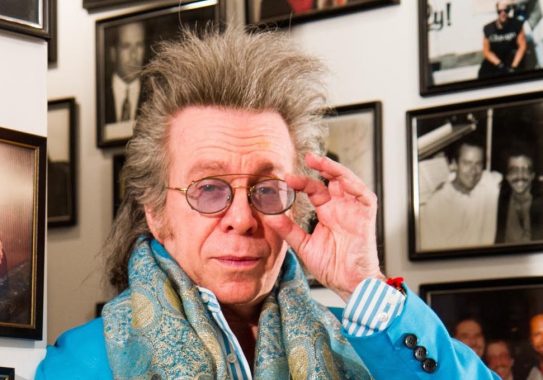 My parents were typical Jewish parents from The Bronx, who at first refused to let me be a doctor. They said, “Don’t shame us that way!” I had to hide in my room to do my homework, and they would bang on the door and say “Come out. We know you’re studying in there. Stop it. You’ll be too successful!” I finally got them to give in. Actually, my grandfather owned a nightclub called “The Red Mill” and I was introduced to show biz at a very early age. My father was a big comedy fan and took me to see comedy movies when I was a kid, and at 12 years old I was already writing comedy for the amusement of my friends.

Teeth, archeology, psychology, or spoon repair. But I’m also working on a knife-throwing act just in case those others don’t work out and the Ed Sullivan show comes back.

4. Where are some of your favorite NYC comedy clubs?

After covering and writing about the comedy scene for the last 20 years, I can honestly say that I’m connected to just about all the clubs, so a better question for me is which clubs do I enjoy hanging out at with some of my favorite people as club owners, whether I’m performing or just there for the hang, and that would include my faves like Gotham Comedy Club, with owner Chris Mazzilli, both New York Comedy Club locations with my bud Emilio Savone, West Side Comedy Club with “the Ashe’s”, Broadway Comedy Club with “the Martin’s”, Dangerfield’s Comedy Club with Tony B., Stand-Up NY with Dani Zoldan, all of the varied Comedy Cellar locations with Noam Dworman, “The Grisly Pear” with my boys Kenny Warren and Gabe Dorado,  and The Comic Strip about which I wrote two books “Make ‘Em Laugh” and “Laughing Legends” with owner Richie Tienken, that had a foreword by Chris Rock.

Too hard to say. I’m too close to it, and I feel like I know them all on the East Coast, but I tend to like the ones that are the best writers with the most clever lines, and clever approaches to difficult topics like Mark Normand, Chris Distefano, and Andrew Schulz. Gary Gulman is also a great writer as is Mike Vecchione and Ted Alexandro.

6. What’s the best advice you’d give a new comedian?

Write as much as you can. Develop a stage persona. Stay away from toilet based material cause it’s just not funny, and you’re supposed to outgrow that by the time you’re 9. Work really hard. If you believe in yourself and you persevere you too can experience the terror of going up on stage and trying to convince strangers that what you think is funny is actually funny.

When I finally started doing stand-up about 10-15 years ago. I had been writing for other comedians before then.

8. How do you deal with hecklers?

I don’t really get hecklers. I hope it’s because of the energy I put out on stage. I work kind of high energy, and people seem to know not to interrupt me. Once in a while, someone will yell out something relating to one of my jokes, and I just tell them it’s not an interactive show. Because of that, I have not developed a lot of heckler come-backs because I don’t seem to need them.

9. What do you talk about in your act?

Things that strike me funny. No politics. Just random things that strike me funny. When I was coming up you needed a strong premise and then built jokes around it which they called “ a hunk” of material. I’m not a storyteller. For me, it’s a joke, joke, joke! I talk about things like traveling, going through customs, weird expressions, cell phones, the weather, texting, chivalry, the fact that no one knows what they look like, and tons more stuff.

10. How did you develop your style of stand up? Who were your influences growing up; both from the world of comedy and elsewhere?

From watching and listening to comedy albums like Woody Allen’s early stuff, and seeing the great comedians of yesterday performing in the Catskill mountains, where I even saw and met the stars of today like Ray Romano who was there with his manager Rory Rosegarten. A great comedian named Dick Capri, one of the stars of Catskills on Broadway was the very first comedian I ever wrote for who paid me for writing jokes and affirmed to me that I was funny. No one buys your jokes just to be polite!

11. What made you decide to be a comedian? Were you born funny?

I had no choice. You can only suppress something for so long and then it has to emerge, or else it drives you crazy.

I generally post my gigs on my Facebook page which is under my name. I feel it’s easier to find people when things are listed under their names.

13. Is there anything else that you wish to promote?

I have six books but the one I’d like to promote is my newest book on Happiness which hit Best Seller status on Amazon. It’s called “Healing Your Heart, By Changing Your Mind – A Spiritual and Humorous Approach To Achieving Happiness” and it’s about learning to change the way you think to let go of the “heart wounds” we call carry from childhood caused by people who hurt our feelings in some way. Those “heart wounds” affect our self-confidence, our self-esteem, and every decision we make in our lives. Every time you have to make a decision you use your thoughts to try and figure out what to do. But if your thoughts are faulty or negative, your decisions will not work out the way you would have liked. I used this knowledge to cure myself of a severe stuttering problem that I had well into my 20’s and beyond. I literally had to change my mind, by changing all of my thoughts to give me the confidence to speak fluently. Now I’m on stage, and I do lots of radio and TV, and I’m grateful every day that I don’t stutter. (And as an avocation I work with stutterers to teach them my technique of how NOT to stutter.)

We hold ourselves back from achieving our goals because of fear and negative thoughts that are usually not valid for us. This book addresses all those things and more allowing you to attain a sense of calm and to achieve a state of Happiness! ( I always capitalize on Happiness because it’s such an important word. It’s really all anybody wants!)

14. How long have you been doing stand up comedy?

I’ve been writing stand up comedy for decades, but only performing for 10-15 years.

I was graced with having met and worked with many of the stars of what was known as “The Golden Age of Comedy.” Milton Berle, “Mr. Television”, who was my sponsor in The Friars Club, Jerry Lewis, Red Buttons, George Burns, Sid Caesar, Henny Youngman. Those guys were amazing to me. My five names are not really stand-up comics but they were comedy stars. The reason I liked them all is that they all had one thing in common. They were funny and made me laugh out loud. It’s not something I do too often.

W.C. Fields, Laurel and Hardy, Abbott and Costello, George Burns and Gracie Allen, and Woody Allen. All gone except for Woody and when I mention Woody I’m talking about his old stand-up routines that he did on the Ed Sullivan show.

Thanks for reading this interview with the very talented stand-up comedian Jeffrey Gurian at the New York Comedy Club – East Village.

If you are looking for some great laughs there is no better place to find tickets than our website.