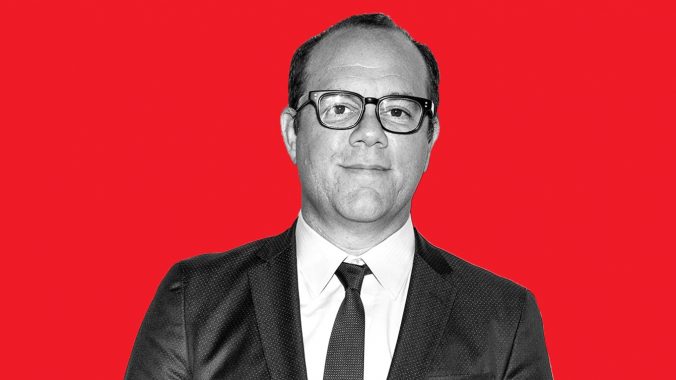 On a new episode of “The Last Laugh” podcast, stand-up comedian Tom Papa talks about his career and long friendship with Jerry Seinfeld, as well as his new Netflix Special “You’re Doing Great!”

As Tom built materials for his latest special, he had to keep reminding audiences, “You are doing great.”

He believes right now, people are overwhelmed with anxiety. “They feel everything’s going down and that they’re not doing enough in their personal life.”

People are not as fabulous as they are seen on social media and they don’t make as much money as people think” he says.

This is why he named his new special “You’re Doing Great!”

Tom says when life is not going great, it’s only an illusion. You are actually doing pretty great. He decided his style of comedy will be less cynical and convey what he really feels, which is more hope than unhappiness.

Like Jerry Seinfeld, his longtime friend who first gave him national recognition when he made him his opener in the late ’90s, Papa has never wanted cynical comedy, instead, he chooses to base his comedy on observations about everyday family life.

He could just be as outraged about Trump as the next guy is, but for him, it’s not funny like most of America’s politically-minded late-night hosts make it.

He says life from the stage isn’t perfect, neither is it ever going to be. There is a lot of stuff people have to deal with, but you’re doing great.

Here are highlights from the conversation, but the whole thing can be found on The Last Laugh on Apple Podcasts.

On why he does not mix politics and comedy

Ultimately comedy is an escape and the last thing he’d want to do is hit the audience with “all that heavy political stuff”, but he believes if he was really good at it, then he’d probably be all on it.

Tom’s focus is on things that last over the course of a person’s life than just politics of the moment.

There are people who are adept at that, and it’s cool if they keep at it. He sees politics as something that shouldn’t be funny and feels disgusted seeing Alec Baldwin dress as Trump on Saturday Night Life because it’s more helpful to Trump than he imagines.

On how he and Jerry Seinfeld became friends

Tom thinks one of the reasons he became friends with Seinfeld is because he wasn’t so much into TV at the time the show ended, and Seinfeld was doing stand-up in the New York comedy clubs. Since he didn’t watch the show, he wasn’t in awe like everyone else.

But he recalls Seinfeld was the biggest star in the country at the time and remembers asking his girlfriend, “should I be telling him that I like episodes?” But thinks Seinfeld was relieved that he wasn’t like, ‘How’s Kramer?’ He is not sure Jerry would have stuck around if he asked that kind of stuff.

Why ‘The Marriage Ref’ ultimately failed on NBC

It didn’t turn out a big success, he reminisces, but he never looks back at his failures as devastating.

However, it was still a failure because it didn’t run for up to 10 years as he would have hoped, but just 2 years. “So many things were wrong with the show”, he says, but he had no control over them.

Part of what hurt was that the first year was Jerry’s Rolodex, so there was Larry David, Ricky Gervais, Madonna, and a host of high-level celebs. While it was cool, it was complicated because it was Jerry’s thing.

The show was supposed to be a quiet Sunday family show, but it turned to be ‘Seinfeld’s return to Thursday nights! He didn’t even get to be shown, they only managed to show his hands and it didn’t get a good reception in the first year, which affected Jerry and made him step away after the second season. At that point, it was basically dead.

Papa recalls his sitcom“Come to Papa” was doing well in its pilot phase and was loved by everybody.

But then Jeff Zucker, the president of NBC stepped down and was replaced by Kevin Reilly. Reilly wasn’t into the show and rather than keep it as Papa just goofing around with his friends, turned it into a workplace and brought in Steve Carell to be Papa’s boss, because of the deal he had with Steve.

It was a try-out for the Office. No one had an idea about that, but with a decision to go for the “The Office” property over the “Come to Papa” thing, that was surely the end.

He says “They had to kill us to free him to put him in that.”