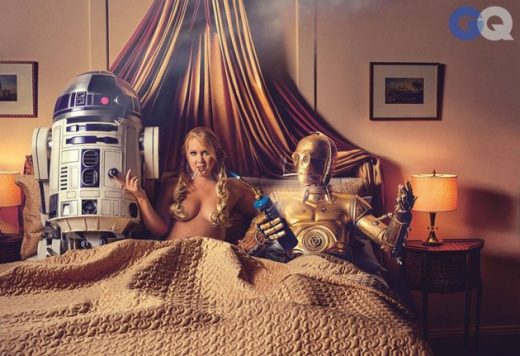 Amy Schumer is on the cover GQ’s Magazine as the cover girl posing with C-3PO.

The  female stand up comedian and star of the upcoming movie Trainwreck is dressed up in “Star Wars” Leia bikini and can be seen on the cover deep throating C-3PO finger. Inside the Magazine you’ll notice Amy Schumer laying in the the bed with both droids C-3PO and R2-D2. As C-3PO lights her cigarette and she pushes R2-D2 buttons.

GQ recently announced Amy Schumer is “The Funniest Woman in the Galaxy”. We wish that we could share more of the article from the GQ men’s magazine. They only sent these StarWars theme pics. In the press release, which features Amy Schumer getting hot & dirty with the famed Star Wars droids C-3PO on the Cover of the Men’s Magazine. read more