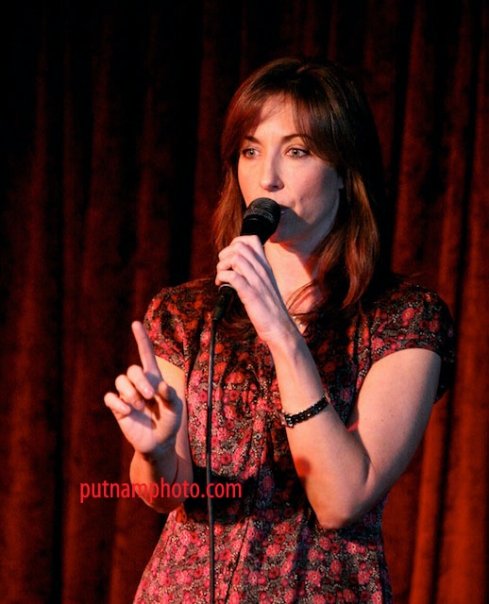 With over 14 years experience performing standup, Jodi Miller is not afraid to push the envelope and in doing so, crowds undeniably give a loving stamp of approval.  As an animated, high energy comic that has a unique spin on life, Jodi’s insightful banter covers everything from cats, to singer/song writers, and how her dad is desperate to get her knocked up! ​

​A native of New Jersey, Jodi Miller graduated East Stroudsburg University with a degree in Broadcast Journalism.  Her ease in front of the camera effortlessly transitioned to scoring roles in the Soprano’s and Law & Order and as a stand-up comic quickly endearing fans on both coasts.  Jodi’s “just got out of bed- raspy” voice combined with her spontaneous, quirky facial expressions creates an addictive mix of incredible wit and charm.

Currently, kicking her feet up in Los Angeles, Jodi is a sought after comedian, television and film writer, and leading lady.  Not to mention, a highly skilled Improv and Sketch Comedy artist that has captivated audiences nationwide.  She is currently a Main Company member at the ACME Theater (Los Angeles) where her creative talents flourish as a head writer, performer, and coach.  Her critically acclaimed one woman show, “Flying Coach,” (debuting in Los Angeles) was awarded Critic’s Pick, due to popular demand was extended twice, and poured in outstanding reviews:  “…biting wit, zinging one-liners and excellent writing” LA Weekly, and Stage Critic‘s Choice from City Beat.

As an accredited writer, Jodi credits include the HBO/Cinemax series Co-Ed Confidential,
Dark Portal (a supernatural thriller starring Lou Diamond Phillips and Pam Grier), and a currently untitled horror script from the creators of Dirty Deeds.  She is the co-author of the WTF Series including: WTF College: How to Survive 101 of Colleges Worst F*#!-ing Situations and WTF Work How to Survive 101 of  Worst F*#!-ing Situations at Work. WTF Women, WTF America & OMG Guys  Both are currently a featured choice in bookstores nationwide and on Amazon.com.

Jodi’s innate ability to captivate audiences has landed her appearances on hit shows such as MTV’s The Rob and Big Black as the comedy coach, The Tonight Show, Chelsea Lately, and Comedy Jam:Entertainers with Bryon Allen.  She also is a reoccurring guest commentator on CNN’s Showbiz Tonight, TV Guide’s Hollywood 411, and the co-host of the award-winning The Damage Report on LA Talk Radio.com.  As well as the star of NewsBusted, a weekly internet news show that pokes fun at politics and entertainment.  You can also catch Jodi on the Travel Channel, SyFy & The Playboy Channel.

Whether it is utilizing her creative talents via pen or in front of an audience, Jodi is sure to find new envelopes to push, innovative takes on the ordinary, and the constant laughter of crowds everywhere.